The Jewish Chronicle has an exclusive story about Jews who came to Britain as refugees from the former British protectorate of Aden (many of whom were secretly airlifted to the UK fifty-two years ago this week).  Lately, these have met unprecedented difficulties in their attempts to renew their UK passports, despite having lived in Britain for decades. 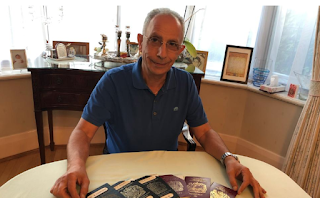 Jewish refugees from Aden who have lived in Britain for decades have spoken of having to “jump through hoops” they have never previously encountered when applying to renew their passports, and being made to feel they are “not British citizens” .

One of those who fled the former British protectorate, which is now Yemen, said he had “been made to wait months and asked to produce documents never needed before”.

During the 1967 Six-Day War, those who remained had to be secretly airlifted out by the Royal Air Force in the middle of the night and were brought to the UK. Those who came were issued with British Overseas Passports.

Rami Kanzen was among the Jews who came to the UK in 1960 and applied to renew his passport using the express channel last month. Mr Kanzen, once given an appointment at the passport office, was told it would take a few hours and that he could come back to collect his passport the following day.

But after a delay over an issue with the first photo he provided, he encountered another setback when officials asked him to return and present copies of his older expired passports.

“I provided some five expired passports, all showing me to be a UK citizen even though I have never had to do that before,” he said.