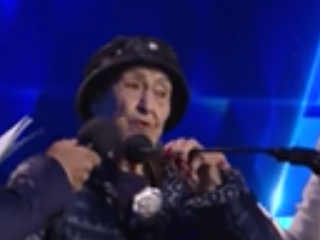 1:13 minutes into the video recording Israel's celebration of its 71st birthday, 93-year old Marie Nachmias brought the audience to their feet as she lit one of 12 torches.

Marie Nahmias is a Holocaust survivor from Tunisia. Mari was born in Tunis, a former French colony occupied by the Nazis in World War Two. The Jews of her town were forced to wear a yellow star and subjected to anti-Semitic laws. Thousands sent to forced labor camps.


As a teenager, Marie Nahmias was smuggled out of her home and taken pre-state Israel to the northern town of Afula, where she married and began rebuilding her life. Along with her husband Avraham, who would spend many years as the senior X-ray technician at town’s Ha'emek Hospital, the couple had eight children of their own with Marie always busy cooking, cleaning, sewing and creating.

When most of her own children had grown up, feeling she had more love to give, Mari and Abraham opened their home to foster children. Many came from broken homes, some with special needs and disabilities. Marie also cared for children who had terminal illnesses until they passed away. Now aged 93, still full of energy for life, she has fostered 52 children.

Her speech was full of warmth and love, for her country and all its people, including the Arabs and Druze, and the Christians and Muslims. It was the highlight of the ceremony for many who saw it.