It did not take long, following this year's Lag Ba' Omer pilgrimage to Djerba, for Tunisian politicians (as reported in Middle East Eye)to stir up trouble by protesting the presence of 'Israeli' rabbis as proof of unwanted 'normalisation' between Tunisia and Israel. Yet a group of 300 Israeli pilgrims were allowed in to the country on special visas. (With thanks: Lily)

Tunisian politicians have accused the government of normalisation with Israel after Israeli rabbis reportedly visited the country’s El Ghriba synagogue, according to the London-based newspaper Al-Quds al-Arabi. 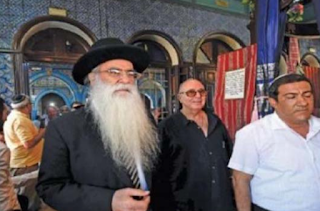 Rabbis 'not Israelis but Tunisian Jews'

Tunisian media outlets shared pictures of rabbis - thought to be from Israel - taking part in a pilgrimage on the Tunisian island of Djerba, known for its longstanding Jewish history. Jewish activists in Tunisia have nonetheless said that the rabbis were "not Israelis, but rather Tunisian Jews living abroad and who visited Tunisia many times previously".

Tunisia, like most Arab countries, has no official diplomatic relations with Israel. Zuhair al-Maghazawi, the secretary-general of the People's Movement party, called the rabbis’ visit a "scandal with the government’s consent", and called for an investigation into the case, according to Al-Quds al-Arabi.

"We have no problem with the Jews, as they are the brothers of the Muslims and they have the right to the annual visit to El Ghriba Synagogue,” Maghazawi said. “Our problem is rather with the Zionist movement, which is trying its best to normalise, establish relations and take advantage of such occasions to penetrate the social and political life in Tunisia.