Stop tainting Israel as an extension of Europe

A western trend positioning Israel as a colonialist aggressor rather than a haven for all Jews fleeing oppression erases the history of Mizrahi Jews like Hen Mazzig, who now form the majority of Israeli Jews. Must-read in the LA Times:

Along with resurgent identity politics in the United States and Europe, there is a growing inclination to frame the Israeli-Palestinian conflict in terms of race. According to this narrative, Israel was established as a refuge for oppressed white European Jews who in turn became oppressors of people of color, the Palestinians.


As an Israeli, and the son of an Iraqi Jewish mother and North African Jewish father, it’s gut-wrenching to witness this shift.

I am Mizrahi, as are the majority of Jews in Israel today. We are of Middle Eastern and North African descent. Only about 30% of Israeli Jews are Ashkenazi, or the descendants of European Jews. I am baffled as to why mainstream media and politicians around the world ignore or misrepresent these facts and the Mizrahi story. Perhaps it’s because our history shatters a stereotype about the identity of my country and my people. Jews that were expelled from nations across the Middle East have been crucial in building and defending the Jewish state since its outset.

Israel, the world’s only Jewish state, was not established for just one type of Jew but for all Jews, from every part of the world — the Middle East, North Africa, Ethiopia, Asia and, yes, Europe. No matter where Jews physically reside, they maintain a connection to the land of Israel, where our story started and where today we continue to craft it.

The likes of Women’s March activist Tamika Mallory, Temple University professor Marc Lamont Hill and, more recently, Rep. Rashida Tlaib (D-Mich.) falsify reality in their discussions of Palestinians’ “intersectional” struggle, their use of the term “apartheid” to characterize Israeli policy, and their tendency to define Israelis as Ashkenazi Jews alone.

I believe their misrepresentations are part of a strategic campaign to taint Israel as an extension of privileged and powerful white Europe, thereby justifying any and all attacks on it. This way of thinking signals a dangerous trend that positions Israel as a colonialist aggressor rather than a haven for those fleeing oppression. Worse, it all but erases the story of my family, which came to Israel from Iraq and Tunisia.

For most of history, the Mizrahim have been without sovereignty and equality in the Muslim world. In Iraq, despite being “equal citizens” on paper, my family experienced ongoing persecution. The first organized attack came in 1941, the brutal Farhud, a Nazi-incited riot that claimed the lives of hundreds of Jews and forced the survivors to live in fear. My great-grandfather was falsely accused of being a Zionist spy and executed in Baghdad in 1951. My mother’s family was permitted to emigrate that same year, but with only one suitcase. 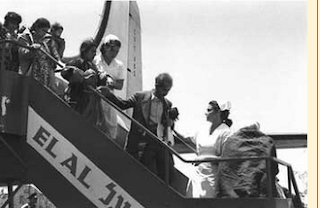 Iraqi Jews arriving in Israel
Any erasure of the Mizrahi experience negates the lives of 850,000 Jewish refugees just like them, who, even in the successor states to the Ottoman Empire of the early 20th century, were treated as “dhimmis,” an Arabic term for a protected minority whose members pay for that protection, which can be withdrawn at any time. Demographic ignorance also works to deny the existence of almost 200,000 descendants of Ethiopian Jews who were threatened by political destabilization in the early 1990s and airlifted to Israel in a daring rescue operation.