In the wake of the controversy generated by a ground-breaking op-ed by Hen Mazzig and his dispute with Marc Lamont Hill, the LA Times  has published the following three letters:

To the editor: Hen Mazzig’s piece serves as an important corrective to the oft-repeated lie that Israel consists of white Ashkenazi Jews. This lie has allowed intersectionality extremists to falsely paint the conflict as one between white Europeans (Jews) and dark-skinned natives (Palestinian Arabs).
In fact, hundreds of thousands of Jews once lived in the Arab world but were driven out or killed when Israel declared statehood. Everyone knows the story of the Palestinians, but most people have never heard of the many Jews forced out of their homes in the Arab world. These Jews were welcomed into Israel.
There is simply no way to resolve this conflict when the basic facts — and the Jews’ basic right to live in their ancient homeland in peace — are buried underneath ignorance and lies.
Sara Miller, New York
. 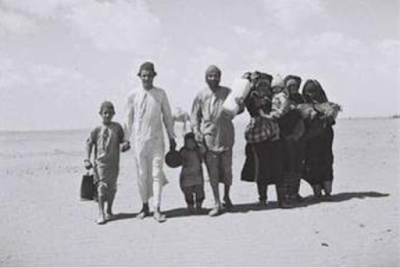 .Jews fleeing Yemen
To the editor: Massig talks eloquently about the experience of Mizrahi Jews who were forced to flee their homes in Iraq and other Muslim countries and found refuge in Israel.
But it is striking that he never mentions the historical experience of another Middle Eastern people, the Palestinian Arabs, which is at the heart of the Palestinian-Israeli conflict.
He decries the characterization of Israeli policy as “apartheid.” But that’s a characterization hard to avoid given Prime Minister Benjamin Netanyahu’s remarks that Israel is “not a state of all its citizens,” but only of the Jews.
In referring to Israel’s Jews, Massig says “an indigenous people have reclaimed their land,” but seems completely oblivious of that other indigenous people, the Arabs, who were the majority in Palestine from the 7th to the 20th century.
Mazzig might want to consider how much his story, and that of other Jews exiled from their millenniums-old homelands in Iraq and Tunisia, mirrors that of Palestinian Arabs.
David L. Saffan, Santa Barbara
..
To the editor: It isn’t just Israel’s Mizrachi and Ethiopian Jews whose remarkable stories repudiate the “Israel is a European colonial enterprise” falsehood. European Jewish history does too.
First, genetic studies confirm the ancestral ties of Ashkenazi (European) Jews to the Levant. If people indigenous to the Middle East are to be deemed “people of color,” this necessarily applies to European Jews too.
Second, Jews in Europe were oppressed and subjugated, not privileged. The Romans who destroyed Judea brought 100,000 Jewish slaves to Europe; it was they who built Rome’s Colosseum. For 2,000 years, European Jews were confined to ghettos, expelled and massacred, culminating in the Holocaust.
Israel is the very antithesis of white supremacy. Rather, an indigenous people has reclaimed its ancestral homeland and turned it into a thriving liberal democracy.
Stephen A. Silver, San Francisco

My comment: David Saffan's letter treats the Palestinian Arabs in isolation, as if their leadership had no agency in their plight and no role, neither in causing the war against Israel, nor  the Jewish refugee problem. The 'apartheid' slur does not merit to be taken seriously unless the situation in Arab states is considered in tandem.

Challenging the myth of 'white. colonial' Israel
Posted by bataween at Monday, May 27, 2019