From this fascinating Elder of Ziyon post we learn that Jews, including from Palestine, were students at the American University of Beirut (UB) in the 1930s and 40s, but that they were exposed to Arab intimidation and eventually discouraged from enrolling. 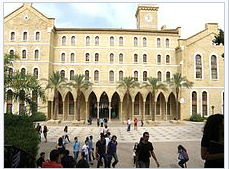 UB tried to attract Jews, including from Palestine, advertising that they were exempt from attending classes on Saturday, availability of kosher food and a synagogue. There was a Jewish student group, the Kadima Society, where the Jews could hang out.

Here was one incident from 1938 that showed that the university's support of Jewish students only went so far:


On 2 November 1938, AUB students observed Balfour Day – a ‘day of mourning’ – by wearing black ribbons. In response, a number of Jewish students wore Zionist colors – blue and white. According to the Palestine Post report, ‘threats of violence were used on the Jews to force them to remove their ribbons’, and one student at the International College, Dani, was ‘attacked and fired at, but not hurt’. As a result, Dani left the college. The Palestine Post printed a verbatim letter following the incident from the principal of the International College, Archie S. Crawford to Dani’s uncle, Nessim Angel, who was himself an AUB alumnus. In the letter, Crawford wrote that Dani’s actions of wearing Zionist colored ribbons on Balfour Day was unprecedented among AUB students. Crawford acknowledged students’ right to express themselves but ultimately criticized this form of Zionist expression:

[Dani] has every right to wear this color or any other ribbon, but it was a tactless thing to do so on this particular day which was being observed as a day of warning by the greater proportion of our student body.

Crawford admitted that students who did not take off the Zionist ribbon upon the request of other students had the ribbon removed by ‘quite unjustified use of force’ by Arab students...