With thanks: Yoel, Doug

This evening marks the start of Yom Hashoah, Israel's Holocaust Memorial Day, a sombre day when  the entire country grinds to a halt as its citizens observe two minutes of silence. In anticipation, the Israeli TV channel 11 (Kan) has broadcast a short documentary (Hebrew) about the Farhud, the June 1941 massacre of Jews in Iraq. 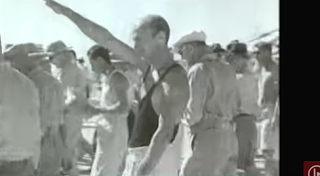 A man gives the Nazi salute. Jewish schoolchildren in Iraq were taught to follow suit

Nissim Kazzaz's father disappeared from a bus where Jews were being selectively murdered. He himself, a child aged 11,  jumped out of a window as the driver sped off. Sami Michael had a lucky escape, as he was wearing clothes resembling the uniform worn by the Futuwwa pro-Nazi youth group. Another witness told how her father was pushed over the family's balcony. A fourth said she had seen a child's mutilated arm in the street, despite her mother's best efforts to shield her eyes from the terrible sight.

The film is remarkable for featuring hitherto rarely-seen footage of street life in Baghdad, rampaging mobs, a man making the Nazi salute and the pro-Nazi Grand Mufti of Jerusalem, Haj Amin al-Husseini, meeting Hitler. Survivors argued that the two days of unspeakable violence, including rape, murder, mutilation and looting, were caused by continuous incitement over Nazi radio by Yunus Bahri.

In recent years there has been pressure from Israel's 2,000 Farhud survivors to have the 1941 massacre, which claimed 179 identified victims, recognised as a Nazi-related event. The government granted survivors stipends and medical discounts.Two petitioners went to court in Israel to argue that the survivors were eligible for reparations as much as other Holocaust survivors from Europe. But in March 2019, Israel's High Court ruled that the Jews of Iraq were not directly impacted by the Nazis. However, it left the door open for the Knesset to pass a new law permitting the Farhud survivors to be compensated.

Makor Rishon has more :'Iraqi historian: "There is a direct connection between the Nazi influences on the Farhud crimes' by Assaf Gibor

In 1953, the State of Israel signed a reparations agreement with the German government, in the framework of which Germany transferred billions of dollars to the government - funds invested in building the country at the outset. Holocaust survivors have been dealing with the Ministry of Finance and the Authority for Holocaust Survivors. The legal process of a lawyer friend was stuck in the bureaucracy of the courts. "The German law established in the 1950s that only Jews whose homeland was ruled by the Nazi regime would be defined as Holocaust survivors, and the Israeli court accepted this law in its own language and according to it," Yedid says.


Yedid and his group did not give up. They appealed the ruling and reached the Supreme Court demanding that the ruling be changed. "Even before the appeal, the Ministry of Finance approached the plaintiffs with a tempting offer aimed at dissolving our moves, and an administrative decision of the ministry determined that anyone who waived his claim would receive a monthly grant of NIS 300 a month and grants for medication. The rest continued the legal battle.
"At first, the state claimed that the Farhud was carried out against the background of hatred of the Jews in general, because of differences in religion and nationality, and later claimed that the reason for the harassment of Jews was that they helped the British regime that ruled Iraq. Because of the incitement of the pro-Nazi government, but then the German law defining who is a Holocaust survivor was removed again - and it was made clear that the Jews of Iraq were not included in this definition.
Incriminating document
The testimony of the Farhud survivors, who describe the acts of rape, looting and murder committed by the pro-Nazi Iraqis against the Jews, is further validated by a document prepared by the Iraqi government immediately after the violent events, which directly links Nazi incitement to the massacre of the Jews.
"A week after the riots, when the pro-Nazi Iraqi regime ended, the new Iraqi government appointed a special commission of inquiry," the committee said, referring to the Jewish and non-Jewish neighborhoods.


Linda Abdul Aziz Menuhin, an Arabic language digital consultant in the Foreign Ministry, notes that Habib is not the only one who expresses his opinion openly about the Farhud. "In recent years there has been a great deal of reference by the Iraqis to Farhud, and there are articles and interviews on television about the Farhud, which they describe as a black stain in the history of Iraq.
"Historians such as Dr. Rashid Elhayon and others are condemning the treatment of the Jewish minority. They are aware that the Farhud led to the flight of the Jews from Iraq and caused economic and cultural deterioration in their country.
There are even voices calling on the Jews of Iraq to return to the country. These historians link the events of the Farhud to the Nazi influence. They accuse the Mufti Haj Amin al-Husseini, who promoted the Nazi ideology and his activity in inciting hatred against the Jews and talk about brainwashing and Nazi propaganda. "
Like many members of the Iraqi community, Menuhin lives in the shadow of the Farhud memory. "Mother told us in great detail about the riots, how they collected the furniture of the house and pushed it against the front door because of the rioters who wanted to enter it, to attack and loot, and she told us about the screams from the nearby houses and about the feelings of fear and terror of the worst. The house ,with six daughters and a son, was surrounded. They felt that every knock on the door lead to breathlessness and fear, and there is no doubt that these events were etched in the minds of the Jews of Iraq. "
Posted by bataween at Wednesday, May 01, 2019