While the vast majority of  Holocaust victims were Ashkenazim, Sephardim from the Balkans, Greece and Bulgaria were also deported to Nazi death camps.  For the first time, this year's commemoration of the Holocaust focuses on the plight of Greek Jewry. Israel National News reports: 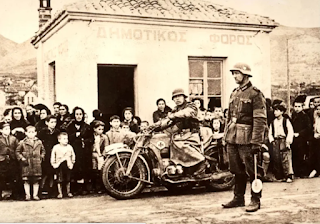 The Nazis arrive in Salonika

On Holocaust Memorial Day (Yom Hashoah), Thursday, May 2, more than 10,000 Jewish and non-Jewish youth from 40 countries and dozens of Holocaust survivors and dignitaries from around the world participated in the 31st annual International March of the Living, the three-kilometer march from Auschwitz to Birkenau, to pay tribute to all victims of the Holocaust and call for an end to anti-Semitism.

This year, for the first time, the event’s main ceremony will honor Greek Jewry, which was almost completely annihilated by the Nazis and their collaborators.

Alan Rosenbaum in  The Jerusalem Post traces the history of Greek Jewry (with thanks: Imre):

The Holocaust of the Greek Jews was one of the most tragic stories about the Holocaust. Though all communities suffered greatly, Greek Jews suffered even more because they were different and even when they reached Auschwitz, their suffering was even greater.” The Greek Jews, notes (Professor Gideon)  Greif, were not used to the frigid climate of Eastern Europe and could not communicate with their fellow Jews from Eastern Europe, because they didn’t speak German, Yiddish, or Polish. They were mocked by Ashkenazic Jews because of their differences, he says. Many of them were compelled to work within the killing installations as Sonderkommandos and were forced to aid with the disposal of gas chamber victims during the Holocaust.

Greif explains that the rate of death within Greek Jewry was among the highest in the Holocaust, “because the Germans used their repertoire of deceit efficiently and hid their murderous intentions.” In addition, he says, the Greek Jews were led by Rabbi Zvi Koretz, the head of the Jewish council, who was naïve, and thought that cooperating with the German authorities would improve their situation. Because he was so obedient, says Greif, one transport followed another until April 1944.


Professor (Devin) Naar notes that while the destruction of the Jews of Saloniki was echoed throughout most of Greece, some communities experienced different fates. The Jewish population of Athens on the eve of the war was approximately 1500, and it doubled and tripled over the course of the war, as many Jews fled there. The Nazis were less successful in deporting the Jews of Athens, and Archbishop Damaskinos of Athens called on the citizens to intervene and speak out against deportations.

Email ThisBlogThis!Share to TwitterShare to FacebookShare to Pinterest
Labels: Holocaust in Arab and Muslim lands, Jews of Greece, Sephardim/ Mizrahim

There were a few thousand Jews from Libya and Tunisia who were sent by the Germans to concentration camps in Europe while those two countries were under German occupation. Many other Jews in those countries were put in forced labor camps.

Of interest in New York
Kehila Kedosha Janina (the Holy Community of Janina) is the only Romaniote synagogue in the Western Hemisphere. Romaniote Jews are a unique community of Jewish people whose history in Greece dates back over two thousand three hundred years to the time of Alexander the Great. The Romaniotes are historically distinct from the Sephardim, who settled in Greece after the expulsion of the Jews from Spain in 1492.

This Yom HaShoah we are honored to host filmmaker Rita Sara Cohen for a stirring presentation of her latest documentary film “Memoirs of a Hidden Child.” Rita's parents survived the war in Athens by being hidden by righteous Christians. Our program will start in the sanctuary for our traditional lighting of the candles in memory of the victims of the Holocaust. Afterwards we will show Rita’s film in our Ada Finifter Communal Room and Education Center.
Refreshments will be served.
Please RSVP to