The Times of Israel reports on a new film about the Cairo Geniza, a unique collection of Jewish documents preserved in the attic at the Ben Ezra synagogue in Cairo  and discovered at the end of the 19th century by European Jewish scholars. (With thanks: Lily)

A new documentary, “From Cairo to the Cloud: The World of The Cairo Geniza,” traces the amazing story of the Geniza from its discovery by Solomon Schechter and other 19th century ancient manuscript hunters through to its digitization more than 100 years later. The film, which premiered in late 2018, is set to screen in Boston on May 16 and 18, as well in other cities worldwide this year. 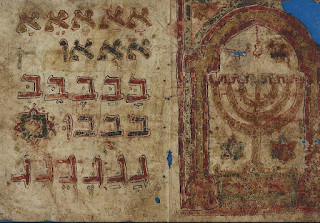 A child's Hebrew primer, found in the Geniza

Michelle Paymar, who produced, directed and filmed “From Cairo to the Cloud,” told The Times of Israel she had been unaware of the Cairo Geniza until someone mentioned it to her some years ago.

“As an Ashkenazi Jew, I had little knowledge or education of Jews in the Islamic World. Around 90% of world Jewry lived under Islam in the medieval period. I didn’t know this or what was brought to Jewish civilization by it,” she said.

Paymar was fascinated to learn that Jews were well integrated into society under Islam. This was especially so in Fustat, the Egyptian city that served as the administrative center of power, and which eventually became part of modern-day Cairo. The Jews flourished under Islam in the 10th to 12th centuries, which is the period most predominantly represented among the documents of the Cairo Geniza.

“Jews were part of the scenery in the Arab world. One would definitely have preferred to have been a Jew in Cairo than in the Rhineland at this period,” Paymar said.

“From Cairo to the Cloud” traces the story of the Cairo Geniza in a more or less chronological fashion. The narrative of how the Geniza was discovered, studied, and more recently digitized for greater access flows clearly. However, it is conveyed by an overwhelming number of academics, librarians and conservators. Paymar interviewed 40 people from various countries, and it is hard to keep track of who they are and how they are connected to the Geniza.