An exhibition  revealing the truth about Mossad's secret rescue missions in the Arab world is being planned at the Israel Intelligence Heritage and Commemoration Center. Story in the Jerusalem Post Magazine: (With thanks: Ruth)

It was the only incident of the era in North Africa and the Middle East where a Jewish community was attacked by an organized armed group, but the Jews were ready and fought back. 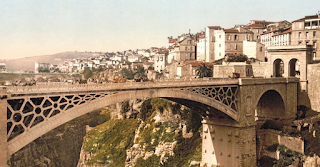 For 25 minutes on May 12, 1956, there was an all-out battle in Constantine, Algeria.With the help of Mossad agent/advisers like Ibrahim Barzilai – a legend who was at the forefront of bringing around 80,000 Jews to Israel from foreign lands over a nearly 60-year career in intelligence – the Jews not only avoided a massacre, but won.

Speaking to the Magazine recently at the Israel Intelligence Heritage and Commemoration Center (IICC), Barzilai went into detail regarding that battle and multiple incidents in which he and the Mossad smuggled to Israel not merely individual Jews but whole Jewish communities that were in danger.

The conversation with Barzilai took place against the backdrop of the IICC kicking into high gear to build a major 250-square-meter exhibition dedicated to telling the stories of Israeli intelligence operatives saving Jews.

The central theme of the exhibition, which is being shepherded forward by Yochi Erlich – who runs many IICC projects and is a retired major from IDF Intelligence – will be “See you in Jerusalem.”

It will emphasize that the Jewish state is the only place “in the world to give the intelligence community the job of bringing large groups” of a specific population sector to another country to save them from persecution.

Erlich said the exhibition will describe how the special mission “to reach Jews as a group and not to help just one person” dates back to David Ben-Gurion. It will feature ex-Mossad agents as tour guides, and interactive and updated hi-tech features and work stations to better tell the stories of the Jews and the various countries they came from.

Read article in full
Posted by bataween at Tuesday, May 07, 2019

Email ThisBlogThis!Share to TwitterShare to FacebookShare to Pinterest
Labels: Jews of Algeria, Jews of Morocco, Jews of Syria