The tale of how Albert Elay Shaltiel evaded Iran’s Islamic Revolutionary Guard Corps (IRGC) is not for the fainthearted. In Jewish Journal Deborah Danan tells how the 17-year-old Persian Jew avoided conscription into the Iranian army and risked his life to escape over the border with Pakistan : 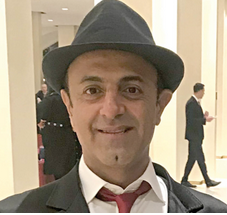 Albert Shaltiel: thrown into a 'coffin'

It was 1987 and the 17-year-old Persian Jew knew he had to make his escape before being forcefully conscripted into the army and sent to war with Iraq.

Leaving his parents at home in Tehran, Shaltiel embarked on a treacherous journey to the tripoint border with Afghanistan and Pakistan. He was smuggled among the cargo of a truck that included weapons, opium and hoards of cash. The Revolutionary Guard seized the truck and Shaltiel was held captive for about three weeks.

Placed in solitary confinement, he was given just enough food to keep him from dying. He was routinely beaten and kicked and was made to wear sackcloth over his head. He defecated and urinated in his pants and was given no extra clothes to shield himself from the freezing desert air near the Iranian city of Zahedan.

Sometimes his torturers would connect his fingers to a box that sent electrical currents through his body in an attempt to force him to give up the names of his smugglers. The only name Shaltiel knew was that of a Jewish family friend who organized his escape. However, he also knew revealing the name would place his friend and his children in peril. “I was ready to die in order to keep this secret,” Shaltiel said.

The days and nights blurred together and the haunting call of the muezzin for daily prayers was the only way Shaltiel could mark time. Eventually, he was thrown into a coffin-like box and hauled into the back of a van to be transported back to Tehran. But along the way, the van crashed and the coffin was hurled outside. Shaltiel subsequently was transferred to something resembling a field hospital. There, he met and made friends with a group of around 15 Baluchi tribesmen who also were being held captive by the IRGC.

One morning, Shaltiel awoke to the sound of gunshots. Their kinsmen were rescuing the Baluchi. They took Shaltiel with them and he lived with the Baluchi for close to a month.

Shaltiel maintains the Baluchi are part of the 10 lost tribes of Israel and said that during his time with them he witnessed a circumcision, men wearing tzitzit and women lighting candles on Friday night.


Shaltiel eventually escaped two months later via Karachi in Pakistan. He sought asylum in Austria and from there traveled to the United States. He remained in America until he made aliyah in 1998. In Israel, he met his future wife, Yael, who was born in the same year and in the same Tehranian hospital as Shaltiel.

In 2005, after years of infertility, Yael gave birth to a baby boy, Ilai. In honor of their “miracle child,” they set up the ILAI Fund. The nonprofit has helped more than 1,000 children with special needs from difficult socio-economic backgrounds gain access to the tools and therapies they need. Each year, Shaltiel takes part in the ceremony organized by Yad Vashem on Holocaust Remembrance Day, laying a wreath to honor the 280,000 disabled victims killed by the Nazis.

A tale of horror and escape from the Ayatollahs

Email ThisBlogThis!Share to TwitterShare to FacebookShare to Pinterest
Labels: Jews of Iran, Testimonies