US donates more towards restoration of Nahum's tomb

The United States announced Friday that it would contribute an additional $500,000 to help restore the tomb believed to be the resting place of the biblical prophet Nahum in the town of Alqosh in northern Iraq, the Times of Israel reports. While the Kurdish authorities (and private donors) have also contributed, it is interesting that Kurdistan has not claimed the site as its 'national heritage', in contrast to Egypt, for instance. 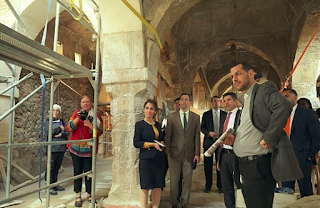 Joey Hood pledged the money on a visit to the tomb last week
“Chargé d’affaires Joey Hood and Consul General Steve Fagin visited the Tomb of Nahum, a site rich in cultural importance to the region’s Jews, Christians and Muslims,” the US Consulate General in Erbil announced. (..)


In November 2018, the US also gave $500,000 to assist in restoring the tomb, according to Adam Tiffen, the deputy director of the Alliance for the Restoration of Cultural Heritage (ARCH), a US-based non-governmental organization overseeing efforts to repair the site.
Both private donors and the Prime Minister’s Office of the Kurdistan Regional Government (KRG) have also made donations to help ensure the conservation of the tomb, Tiffen told The Times of Israel in a phone call.
The 1,500-year-old building was for centuries the site of a major Jewish pilgrimage each year on the holiday of Shavuot.
Read article in full