The story behind Habiba Msika's piano

The exhibition Leaving, without ever returning (on at Tel Aviv’s Eretz Israel Museum until 31 July) 31 treats with due seriousness the immigration to Israel of the Jews from Arab countries and Iran. So what’s a simple piano, adorned with a pair of simple pewter candlesticks, doing there? Haaretz has the backstory (With thanks: Imre; Yoram)

The explanation is both fascinating and tragic: The piano belonged to Habiba Msika, a Jewish actress and singer who in the 20th century was considered one of the greatest Tunisian artists, adored by Muslims and Jews alike.  Msika was born in 1903 to a poor family in Tunis’ Jewish quarter. An orphan at an early age, she went to live with her aunt. She developed her singing talent at Jewish weddings and later as an actress in the new Arab theater.  “There were singers with better voices who were more beautiful, but the secret of her success lay in her exceptional personality and her ability to create a warm connection with the audience,” wrote Prof. Yaron Tsur, an expert on the history of the Jews in the Islamic world.

That exceptional personality included multiple romances, unusual at the time, with Jews, Muslims and Christians.

Msika was also unusual in her feminism. She demanded, and received, a higher salary than male actors and singers, as well as leading roles, including a “masculine” role (the biblical Joseph), which unleashed a scandal. Her career soared and she also performed in Berlin, Nice, Paris and Monte Carlo – but everything ended tragically at its peak. In 1930, shortly before she married a young non-Jewish Frenchman, she was murdered by an older Jewish man who was in love with her. When she didn’t respond to his advances (and according to a different version, when she ended the affair with him), he set her on fire in her home and committed suicide. 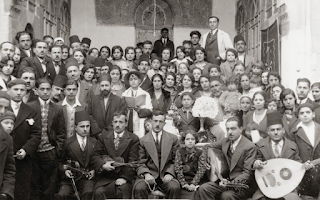 She lived only one more day, even though she was rescued from the fire by her neighbor, Rachel Tubiana. The Msika family invited Tubiana to choose a souvenir from the items the star had left behind. She chose the piano. In 1952, when her family immigrated to Israel, the piano came too.

The curator of the exhibition, Dana Avrish, was born in 1979 and is a third-generation descendant of Iranian, Lebanese and Syrian Jews. She knew this piano from her visits to her friends Yoel and Rinat Shetrog, who live in the community of Lapid, about halfway between Tel Aviv and Jerusalem, along the Green Line. Yoel, a professional photographer, is Tubiana’s grandson.
Avrish and the Shetrogs would listen to the songs of Corinne Allal, the Israeli singer who was born in 1955 and immigrated to Israel from Tunisia at age 8. The Shetrog girls would play that old piano in their living room. Recently, when Avrish did the research for the new exhibition, the family agreed to lend it as one of the exhibits.

Shetrog provided the exhibition with another item that sheds light on Tunisia’s Jewish community: medals won by his grandfather Yehoshua Shetrog for his famous fig arak. Shetrog was an important mohel (a ritual circumciser), an important shohet (a ritual slaughterer) and a rabbi. His students included Yehuda Meir Getz, the Western Wall rabbi who died in 1995.

Yehoshua Shetrog was also a winemaker and the owner of a café where his arak was served. The medals show that he won competitions in Milan, Barcelona, Paris and London. In 1956 he immigrated to Israel with his family.

The piano and the medals are evidence of the flourishing, ancient Jewish community in Tunisia, a country that won independence in 1956. The exhibition also tells the other side of the story about the Jews who for thousands of years lived in Arab lands and Iran – the persecution, pogroms and anti-Semitism that reached a peak when Israel was established in 1948, leading to the exodus of about a million such Jews, the Mizrahim.

“Along with their strong roots and an attachment to the cultures of the Islamic countries in which they lived, the Jews throughout the generations, especially in modern times, also experienced hardships that uprooted them from their homes and turned many of them into refugees,” Avrish says. She says that their aliyah to Israel was a painful departure that reverberates to this day.