Singing from a multitude of songsheets

If asked how to define her identity, Aline P'nina Tayar would say she was a Jewish Maltese Australian Englishwoman.

Multiple identities are not uncommon among Sephardi Jews, but Maltese? to be a Jew of  Malta is unusual, pace  Christopher Marlowe. 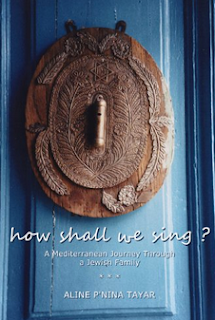 Aline Tayar was born in Malta in 1948 from a family of Tunisian Jews of Livornese descent on her mother's side. Her father's great-grandfather was a rabbi who had settled in Malta. Devoutly catholic and claustrophobic, Malta was not a particularly hospitable place to be a Jew, and the community never had more than 100 members in modern times. Aline's family remained far-flung, with eccentric,  multilingual relatives living in France, Italy, Tunisia and Egypt.

Aline's memoir How shall we sing? is a tale of 'survival through geographical re-arrangement' as she quaintly puts it. Aline takes the reader on a journey around the Mediterranean to meet members of her tribe, and explore what it is to be a Jew belonging nowhere and yet at home everywhere. Her own dislocated nuclear family could not resettle successfully on an Israeli kibbutz, so her father moved them to Australia.

Aline admits to being 'both drawn and repelled' by the Jewish determination to remain exclusive, yet 'a world without cultural differences is unattractive'. No matter how hard Aline's family tries to run away from the past, it catches up with them. The book's characters are finely observed, the atmosphere evocative, the writing engaging and funny. About Israel, the attitude is  'we want the state to exist, on the other hand, we would prefer other people to live in it.'

It is 19 years since How shall we sing? was first published by Pan MacMillan in Australia. A retired conference interpreter, she now teaches conference interpreting in Shanghai. She is seeking financial backers for the film adaptation of her 2011 prize-winning novel ' Island of Dreams'.
Posted by bataween at Thursday, April 25, 2019

Email ThisBlogThis!Share to TwitterShare to FacebookShare to Pinterest
Labels: Books