Recalling the forced conversion of the Jews of Mashad

One hundred and eighty years have passed since the forced conversion of the Jews of Mashad in Persia to Islam, known as the Allahdadi event. To commemorate this 1839 trauma, the Mashadi community in Greatneck, USA has produced the above 15-minute video.

Jews have lived in Persia since the destruction of the first Jerusalem temple in 586 BCE, but history has not always treated them kindly.

The video tells how synagogues were burnt down and thirty-two Jews died in the Allahdadi pogrom (Persian for 'God-given') , one of a series of assaults; the entire community of 400 families decided to save themselves by reciting the shahada marking their conversion to Islam.

Known as New Muslims, the community used subterfuge to maintain their Judaism secretly. The children were taught the precepts of their religion by the elders behind closed doors. The Mashadi Jews developed a script called jadidi which only Jews could understand.

Jews took on a Muslim name in addition to their Jewish name. The prefix Hajj denoted a person who had been on pilgrimage to Mecca or Karbala, the great Shi'ite shrine in Iraq.

In effect, they led double lives. Children were betrothed at a young age to prevent a Muslim demanding a Jewish girl's hand in marriage. Two marriage certificates were produced at a wedding - one Muslim, one Jewish. (It is interesting that even though they were now Muslim, society at large still considered them 'untouchable' or najjas : the Jews of Mashad were forced to build their own bath houses.) 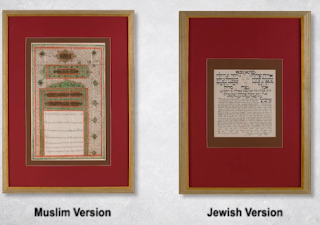 A Mashadi bride received both Muslim and Jewish ketubot
So successful were the Jews of Mashad at preserving their Jewish traditions that a thriving Mashadi community exists today.

For a full history of the Jews of Mashad, see this issue of the Aish magazine Perspectives. An article by Mehran Levy begins on page 14.(With thanks: Michelle)
Posted by bataween at Monday, April 08, 2019