For the first time in 100 years, a dayan (judge) has been appointed head of the rabbinical court in Morocco, reports  Times of Israel.  Rabbi Yeshayahu Pinto, who is from Israel where he spent a year in jail for corruption, was inaugurated lat week as a new Yeshiva for 40 rabbinical students was opened in Casablanca. The yeshiva heralds a possible  renaissance of Moroccan-Jewish life. A new chief rabbi will be appointed soon.

Inaugurated Saturday night at the end of Shabbat, a yeshiva, a center for Talmudic studies, opened at the Beth-El synagogue in Casablanca, Morocco, the HuffPostMaghreb reported. This is the only institution of its kind in Morocco. The ceremony was attended by the(governor) of Casablanca, Serge Berdugo, Secretary General of the Council of Jewish Communities in Morocco (CCIM), and Yoshiyahou rabbi Pinto,appointed at the same event av beth din of Morocco, leader of the rabbinical court which will also officiate notably as head of the kashrut in the country. 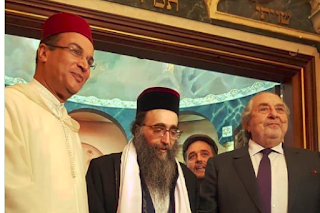 The school was created through Rabbi Pinto's Shuva-Morocco association and in partnership with the CCIM, which will provide the premises of the synagogue. It will host 40 students. Questioned by the HuffPost Morocco, Serge Berdugo said: "You realize the importance of the thing? Students of Moroccan origin, from around the world, will come to study the Moroccan Judaic tradition."

In a statement, the CCIM announced that the objective of the association Shuva-Morocco was the "spread and dissemination, within the Jewish community of Morocco, of Torah study, Hebrew culture and traditional Judeo-Moroccan precepts, general education, Hebrew and Arabic languages, training of teachers and rabbis, and support and help for the needy.

The opening ceremony of the yeshiva and the appointment of Rabbi Yeshiyahu Pinto to the post of av beth din of Morocco took place in the presence of the governor of Casablanca and Serge Berdugo. During the ceremony, Yeshiyahu Pinto, descendant of a line of great Moroccan rabbis, promised the small Jewish community of the predominantly Muslim kingdom that they would "follow a new path" under his direction.

In his speech, following his nomination as av beth din, the rabbi briefly recalled his one-year prison stay in Israel: "It was God who put me to the test. "

The Rabbi, a Kabbalist who enjoys great international popularity with celebrities and businessmen, settled in Morocco in early 2017, after his release from prison. He had been convicted of bribing a police official in 2014.As part of a plea bargain he had agreed to testify against Menashe Arviv, the former head of the police's anti-corruption unit, who is suspected of having accepted bribes from businessmen associated with the rabbi.

As the head of several charities and institutions specializing in the study of Torah in the coastal city of Ashdod and the United States, he has also been the subject of a number of investigations by the FBI.

More recent articles of interest: (with thanks: Stan, Lily)