Writing in the New York Times, Anouar Maji and Yaelle Azagury have produced a nuanced view of Morocco's relationship with its Jews. The King is rightly  applauded for preserving and promoting Jewish heritage. The writers blame 'European colonialism, the creation of Israel and the emergence of Arab nationalism, imbued with elements of anti-Semitism, for dividing the Jewish and Muslim communities'. But the causes of the mass exodus predate the 20th century.   European colonialism was in the main good for the Jews, as it liberated them from centuries of 'dhimmitude'  and forced conversions.There were a few privileged financiers and courtiers, but popular feeling was very often anti-Jewish, leading the Jews being locked into ghettoes for their own safety, and  to more pogroms than in other parts of the Arab world. (With thanks: Gina, Boruch) 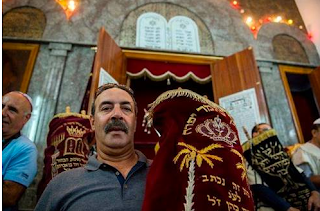 that Morocco’s identity has been “nourished and enriched” in part by “Hebraic” components. Around that same time, King Mohammed VI embarked on a wide-ranging rehabilitation project that reflects his “ the cultural and spiritual heritage of the Moroccan Jewish community.

More than 160 Jewish cemeteries with thousands of gravestones have been uncovered, cleaned up and inventoried with funding from the kingdom. In addition to synagogues, former Jewish schools have been renovated with the king’s support. The original names of the Jewish neighborhoods where many of these synagogues have stood for centuries have also been reinstated. In 2013, Abdelilah Benkirane, then the prime minister of Morocco’s Islamist-led government, read a message by the king at the reopening of the newly restored Slat al Fassiyine synagogue in Fez in which he pledged to protect the Jewish community.

Other houses of worship, like the splendid 19th-century Nahon synagogue in Tangier, are now museums. The Ettedgui synagogue in Casablanca and the adjacent El Mellah Jewish Museum, founded in 1997 by Moroccan Jews who believe in a shared future between Jews and Muslims, were restored and rededicated by the king in 2016. El Mellah is the only comprehensive Jewish museum in the Arab world. There are plans for three more in Morocco. (...)


Much still remains to be done, but these are promising developments. The question is, why now?

With a mere 2,500 Jews left in the kingdom, compared with some 240,000 in the 1940s, this endeavor may indeed appear purely symbolic, or even designed to bolster Morocco’s image in the world. It will not bring Moroccan Jews back in any great numbers. But the kingdom’s embrace of Jewish heritage is a strong reminder of the Jews’ rightful place in Morocco’s history, despite some strained chapters.


In the 20th century, European colonialism, the creation of Israel and the emergence of Arab nationalism, imbued with elements of anti-Semitism, divided the Jewish and Muslim communities and set them on different paths. Fearing violence and persecution, Jews left the kingdom for Israel and elsewhere. But the Moroccan Jewish diaspora in Canada, France, Israel and Venezuela have retained strong ties with their old homeland, often helping to fund renovations.

In the popular imagination, Jews and Muslims are seen as locked in an eternal struggle, but this wasn’t always so. From Morocco to Iran, Jews have lived in Muslim lands for centuries, with the two communities developing complex linguistic, cultural and commercial ties. Their coexistence was far from perfect, but as the historian Michel Abitbol and others have shown, Jews fared significantly better in Arab lands than their brethren in the shtetls of Central and Eastern Europe. From the Middle Ages throughout the Early Modern period, Sephardic Jews often prospered as merchants, translators, administrators and agents for the sultan.

Nowadays, the global media — which tends to dwell on what separates, rather than unites, Jews and Muslims — and the spread of Islamic fundamentalism on the internet has left Morocco’s youth largely unaware that a sizable Jewish community lived among them only 60 or 70 years ago. As the Moroccan anthropologist Aomar Boum has argued, Muslims have only “memories of absence” of their Jewish neighbors. Morocco’s gestures of openness help remind its citizens, and the world, that the country’s Jewish history matters and is worth honoring.