Moroccan-Jewish family injured in US shooting

Members of the Dahan and Peretz families, originally from Morocco, were injured in the synagogue shooting on 27 April 2019 at Poway in California. Ironically, the family had moved to California to escape rocket attacks in Sderot, the Israeli town a kilometre away from the Gaza strip.  The Times of Israel reports: 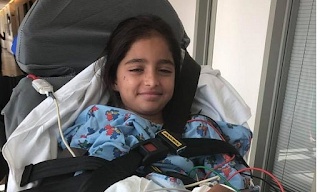 Eight-year-old Noya Dahan in hospital: her family had moved from Sderot


“We came from fire to fire,” said Israel Dahan, Noya’s father, referring to the family’s move from the rocket-battered Gaza-border town of Sderot to California.

Dahan told Israel Radio that the family’s home in Sderot had been hit by rockets several times over the years, and that he was injured on one of those occasions.

After moving to the US several years ago, he said, the family’s new home was targeted — this time by anti-Semites, who spray-painted swastikas on the walls.
“It can happen anywhere. We are strong,” he said.


Peretz said he was able to quickly protect children from harm during the attack due to instincts he honed over years rushing to shelters to hide from thousands of rockets fired by terror groups in the Gaza Strip over the last 15 years.

CNN Interview with Noya
Posted by bataween at Tuesday, April 30, 2019

On over-coming vicarious trauma
https://www.jns.org/grieving-with-poway-and-posing-the-question-is-this-our-new-normal/ Rabbi Sytner, ... also offered on-the-ground counseling in Pittsburgh in the aftermath of the Tree of Life Synagogue shooting, and in Parkland, Fla., following the mass shooting ...