More reviews of 'Spies of No Country'

Matti Friedman's new book, 'Spies of No Country' - the story of Israeli intelligence's Arab Section -  continues to attract favourable reviews in the press and media. Here are two more reviews, in Haaretz and the Times of Israel (with thanks: Jonathan):

Steven Silber reviews 'Spies of No Country' in Haaretz:

Spies of No Country: Secret Lives at the Birth of Israel,” by Matti Friedman, Algonquin Books of Chapel Hill, 248 pages, $26.95

Mizrahi Jews are descendants of Jews from the Middle East who, unlike the Sephardim, have no ancestors from Spain or Portugal. 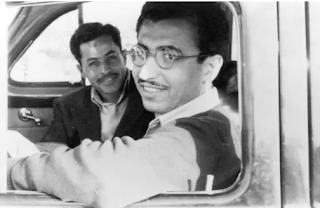 .Spies of the Arab section relaxing off duty in Lebanon


Matti Friedman, the author of “Spies of No Country,” takes an interest in this community, lamenting that Mizrahi Jews have been “condescended to, and pushed to the fringes.”

Friedman’s book — like this review — isn’t the place to analyze the injustices; suffice it to say that “Spies of No Country” rights one wrong by telling the story of how a handful of Mizrahim — only one with a high school diploma — helped launch a precursor to the Mossad.

They persevered even if their role in the nascent Israeli intelligence service, the so-called Arab Section, sidelined them to “one of the only corners of the Zionist movement where their identity was valued,” as Friedman puts it.

Lyn Julius reviews the book in The Times of Israel:

Friedman’s underlying purpose is to give credit to Jewish heroes from Arab countries who helped build the state of Israel as surely as did David Ben-Gurion. When the state of Israel was founded, only one in ten Jews was from the Arab world. But after 1948, boatloads of Mizrahim transformed Israel’s character into that of a Middle Eastern state. These refugees – now comprising over half the Jews of Israel –  brought with them the certainty, honed by centuries of subordinate existence as dhimmis,  that the Arabs would never reconcile themselves to a ‘minority insurrection’ against Islamic domination.  Defeat by the despised Jews would never be considered the final round in a struggle that might last centuries.

Friedman also develops a theme he has already touched on in earlier articles and essays: that the Israel of the kibbutz,  of the early Ashkenazi founders, is increasingly out-of-date in explaining the country. For this alone, ‘Spies of No Country’ , which has been widely reviewed in the mainstream US press and media, has performed an invaluable service in countering the ‘European implant’ paradigm through which so many, including rising stars on the left of the Democratic party,  misperceive Israel.


Read article in full
Posted by bataween at Tuesday, April 02, 2019