Is Egypt showing signs of rebuilding links? No comment.

Is Alexandria's Jewish community experiencing a revival? Or is its  Nebi Daniel synagogue, for a time reinvigorated by an Israeli minyan during the High Holidays, destined to be a memorial to a defunct community?  Richard Spencer in The Times puts a positive spin on recent promises by Egypt to restore Jewish heritage, but it's not convincing. (With thanks: Lily, Boruch)


Alexandria’s sea front and many of its belle époque mansions were built by Italian Jewish engineers. Round the corner from the synagogue stood the Maccabee billiard hall where Lawrence Durrell courted Eve Cohen, model for the femme fatale Justine in his Alexandria quartet.

Then everything went into reverse. Waves of hatred after Israel was established were accompanied by expulsions under Nasser and by 1970 most Jews had fled. There can be little doubt that the community is on the verge of extinction. Or is it? Behind those high walls on Nebi Daniel Street, something remarkable is happening.

After the uprising of 2011 the authorities deemed Alexandria too insecure to guarantee the safety of the annual Israeli visitation. Shortly after, in a symbolic blow, the synagogue’s roof fell in. This year, however, the sound of hammers has rung out. Renovation has begun, sponsored by the antiquities ministry, intent on not just repairing the roof but rebuilding the finest synagogue in the Middle East.
It is a rare good news story for Egypt — at least I think it is. As with the history of Alexandria itself, the thinking behind the restoration has many layers. It was not possible to visit. The ministry referred me to the state information service, which referred me to the state security bureau. Letters were stamped. But even so the army construction company carrying out the repairs declined. 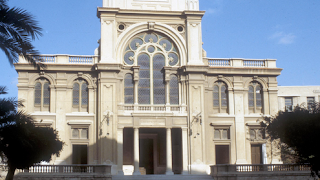 The deputy antiquities minister, Hisham Samir, was happy to meet. He is a brigadier-general, however, who was less happy at suggestions that the anti-Islamist President Sisi might be sending a signal. “This is not political,” he insisted. “We have a legal responsibility to restore antiquities.” Is Egypt showing it disavows antisemitism, I asked. “There is nothing like this at all,” he said, smiling but ambiguous.

I was given a tour of other Jewish sites by Zahraa Adel Awad, a guide and trove of information. She said that the opening to Jews was real, partly motivated by an investment climate quietly attracting Egyptian-born businessmen living abroad. Another source said that the restoration was being funded not by the government but by three overseas Egyptian-born Jews. Again, it was hard to establish the truth. The community’s few representatives were “unavailable”. One, eventually, admitted they had been asked not to talk to journalists until restoration was complete.

One man who did was Yves Fedida, 73, whose parents were married in the synagogue and who played there as a child. Now living in London (Paris -ed), he maintains a benevolent watch on Egypt’s Jewish heritage.

He said with a wink in his voice that the ministry was funding the restoration — but that state coffers received generous donations. He also returned to history’s complex layers. “What’s remarkable is how Egyptian governments, all of them, managed to protect the synagogues,” he said. “Even during the worst outbreaks of violence, there were always guards.”

Perhaps the biggest miracle is that 2,350 years after Jews helped Alexander the Great to build his dream city, they are still there. Maybe, with the restored synagogue, some will return. Even if not, they will have a fitting memorial.