How to make 'authentic' soft matzah at Passover


They call it soft or 'authentic' matzah - the kind that Sephardim have been eating for thousands of years at Passover. My Jewish Learning traces the development of matzah through the centuries - from soft to the 'hard' norm - and explains how to make your own 'soft' matzah . (With thanks: Michelle -Malca) 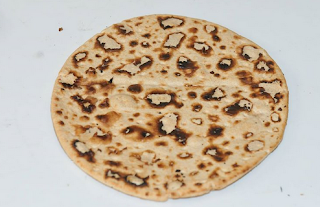 While most matzah today is baked at a factory into uniform squares of brittle, crunchy crackers, hundreds of years ago, matzah was a thicker, softer, hand-made variety that few today would recognize. Some Sephardic Jews, however, still make matzah in this style, and when we found out, I wondered if this unleavened flatbread might be a clue to what matzah looked like before mass produced, factory-made matzah.


The Sephardic Passover blog, Too Good To Passover, writes “In Ethiopia, matzah is made just like it it had been done for the first Passover when the Jews were fleeing Egypt through the desert: By hand. And FAST.” The bread is still made in under 18 minutes, and it’s fried on a flat clay pan. The result is a flatbread that’s about the size of a pita, with a nutty, earthy taste. Since this type of matzah has a short shelf life, it’s eaten immediately or within a day or two.
This style of baking matzah is often referred to as “authentic,” resembling the way that matzah was made thousands of years ago.

Chabad.org echoes these sentiments, writing, “by the 17th century matzah had thinned out to about the thickness of a finger, it was still soft, and so would not stay fresh for more than a few days.” It explains that matzah became thinner and more cracker-like due to concerns that the bread wasn’t entirely cooked within, and therefore not kosher for passover. Another interesting trend arose during the 18th century — there was a greater demand for more shelf-stable matzah that wouldn’t start to mold. By adding less water to the mixture and by kneading longer and with more effort, matzah bakers were able to achieve extremely thin, crunchy matzah that took days or even weeks to spoil. By the end of the 18th century, hard matzah was the new norm.

Today, of course, the process of making matzah is so modernized and efficient that matzah can be made months in advance of Passover and still considered “fresh.” But there’s still Sephardic and Yemenite families who make soft matzah by hand according to their own traditions handed down for generations, during the week of Passover.

If you’re interested in making your own soft matzah this year, here are some recipes to get you started:

Read article in full
Posted by bataween at Tuesday, April 16, 2019

Another video on Soft Matzah by Rabbi David Bar-Hayim
https://www.youtube.com/watch?v=A3lkauu3f-k