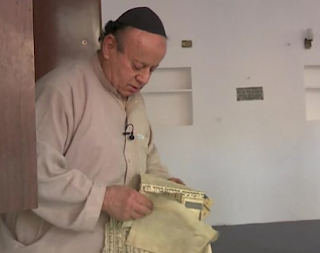 Simantov with his torn Hebrew writings

Afghanistan's last Jew, Zevulun Simantov, has long been a curiosity for the western media.

The BBC has just visited him again and has filed this video report.

In previous reports, Simantov has almost laughed off the Taliban's efforts to convert him. But this time, things seem to be getting serious. Someone has pulled Jewish 'placecards' off the walls and torn them up. Afghans are still trying to convert Simantov to Islam. But he won't do it, even if they paid him.

The report gives the impression that the 5,000-member community left as a consequence of the creation of Israel in 1948. In fact their situation had deteriorated beforehand.  Jews are also said to have left after the 1979 Soviet invasion but there could have been no more than a handful still in the country at that time.
Posted by bataween at Sunday, April 14, 2019