Ashkenazi Jews are Middle Eastern too

Strident anti-Zionist voices on the left of the US Democratic party are trying to distance  Ashkenazi Jews from their ancestral homeland in Israel by calling them 'white Jews'.  Joshua Robbin Marks writes in The Times of Israel that Ashkenazi Jews who are conditioned  also to describe themselves as 'white' need to de-colonise their minds: all Jews are Middle Eastern.

On a recent Friday night I learned about the Jews of Turkey at a Shabbat sponsored by JIMENA (Jews Indigenous to the Middle East and North Africa) which took place at Sephardic Temple Tifereth Israel in the Westwood neighborhood of Los Angeles. When I told the woman sitting across from me at the dinner following services that I am 100 percent Ashkenazi Jewish she seemed surprised and replied “but you look Middle Eastern.” 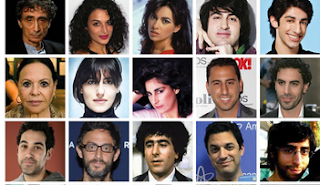 This response also occurred at a similar JIMENA Shabbat at the same Sephardic synagogue last year when we learned about the Jews of Libya. Same surprised look. Same response to me being Ashkenazi. That I look Middle Eastern.
My response is always that we are Middle Eastern. Many Ashkenazi Jews are phenotypically Middle Eastern or Mediterranean reflecting modern genetic studies that attribute at least half of our DNA ancestry to the East Mediterranean/Levantine Middle East which Israel is right in the middle of – where the ethnogenesis of the Jewish people took place thousands of years ago and where Diaspora Jews originated.

The reality is that on a genetic level there is virtually no difference between Ashkenazi, Sephardic and Mizrahi Jews except that Ashkenazi Jews have slightly more European admixture reflecting our long sojourn on the European continent dating back to Roman times and even earlier in the Mediterranean Diaspora to Greek times.

This is where the Sephardic and Mizrahi Jews came from – the same source population as Ashkenazi Jews with later admixture events in the Diaspora.
But if Ashkenazi Jews are at least half Middle Eastern and probably more in nearly all cases, then why do anti-Israel activists such as Linda Sarsour call us “white Jews” or the “white Jewish community” when Sarsour as a self-described Person of Color is actually lighter-skinned than many Ashkenazi Jews that she calls white? And why do so many Ashkenazi Jews call themselves “white Jews” as a juxtaposition with “Jews of Color” when many of them actually have darker features and look more Middle Eastern than the JOC that they so badly want to be seen as virtue signaling allies of?

What is going on with the likes of Sarsour, Rashida Tlaib and other anti-Israel leaders is an attempt to distance Ashkenazi Jews from our ancestral homeland by calling us white Jews as part of the effort to portray Israel as a European colonial project that forcefully displaced the native Palestinians rather than seeing the Zionist movement as the return of an indigenous people to their ancestral homeland not to displace anyone but to reinvigorate the Jewish people and our traditions in our birthplace and to provide a safe haven from anti-Semitism that has too often turned violent and even genocidal in the case of the Shoah.
They call themselves POC as a way to deflect any criticism of their positions even though Sarsour herself has stated that when she removes the hijab she is seen as a white woman and again Sarsour is lighter-skinned than many Jews she labels white.

The Ashkenazi Jews who call themselves white Jews have not acknowledged our Middle Eastern ancestry or don’t want to. They only look at our recent experience in Europe or that they might be light-skinned and presume that Ashkenazi Jews are native to Europe despite many genetic studies finding that we have substantial Middle Eastern ancestry with later European admixture events.