The Eretz Museum in northern Tel Aviv is neither fish nor fowl, a campus of 1970s pavilions housing a pot-pourri of exhibits pertaining to Israeli culture and history - from glass, ceramics, ancient wine presses and coin collections reaching back into Israelite times, to the 20th century work of the famous journalist-photographer David Rubinger. Now,  however, in a far corner of the postal history pavilion, is a new temporary exhibition devoted to the exodus of  Jews from Arab lands.

The Israeli curator of Leaving, never to return is Dana Avrish, whose grandparents came from Syria, Lebanon and Iran. Avrish lived in Morocco for two years.

The exhibition title was inspired by the words stamped on the exit certificates and suitcases of hundreds of thousands of Jews: رحلة بدون رجعة (literally: one-way trip). 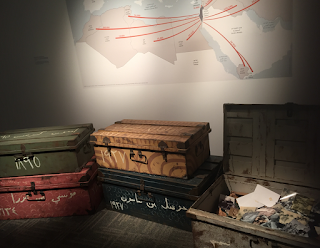 As the visitor is steered past a pile of suitcases, the film Forgotten Refugees plays on a loop, while the voices ring out of individual Jews whose stories of displacement were recorded by the Seeing the Voices project. Artefacts and everyday objects, ranging from tikkim (the wooden cases housing Torah scrolls) to marriage certificates, documents, musical instruments, jewellery, ornate gowns used at marriages or circumcision ceremonies, and even a piano played on by Habiba Messica, Tunisia's famous 1920s singer, adorn 11 glass showcases, each representing an Arab country and Iran.
Below: showcase representing the Jews of Iraq. 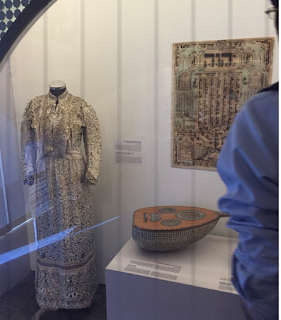 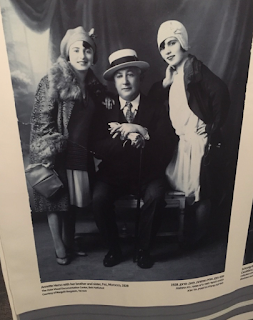 Above:  Annette Hemo with her brother and sister, Fez, Morocco, 1908

From the ceiling hang 11 talithot (prayer shawls) to illustrate the stories (in English and Hebrew) of each  community - Morocco, Algeria, Tunisia, Syria, Lebanon, Iraq, Libya, Egypt,Yemen, Aden and Iran. Each bears a historical timeline, family photographs and a paragraph describing Avrish's own personal connection to that particular country, an anecdote or writer's quote. There are also works of art on display by modern Israeli artists of Mizrahi heritage.

The talith is the common thread linking the Jews of all these countries. Avrish was inspired to use this representation of religious continuity by an event that took place at the Giado work camp in fascist Libya during the Second World War: an officer entered a prison barracks, ran his finger over the dusty wooden beams, and threatened the 100 or so inmates with heavy punishment if the barrack was not cleaned. In the absence of anything but the scant clothing on their bodies, one man took out his talith, detached its fringes, and turned it into a cloth. And so, more than the Jews preserved the talith, the talith preserved them.

The last talith suspended beside the exhibition exit is blank, possibly symbolic of the fact that no Jews live in the Arab world anymore. The story of more than 2,000 years of Jewish life in the Middle East and North Africa outside Palestine is over, but the talith remains, in all its purity and longevity.

Leaving, never to return is on at the Eretz Museum, Tel Aviv until 31 July 2019.