Why I cannot stay silent about Iran's regime

Karmel Melamed is a journalist with Jewish Journal of LA. On the 40th anniversary of the Iranian revolution he explains why he will never stop writing about the horrors visited upon the Jews of Iran and others. 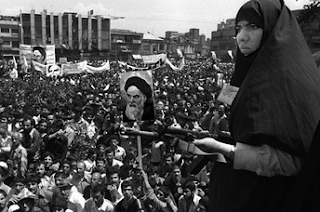 A demonstration in favour of Ayatollah Khomeini in 1979

“I’m tired of hearing about their hostage stories and what happened to them back then… can’t we just move on?” he asked me.

My answer was a simple “no.”

The nightmarish hell unleashed upon Iran’s Jews at the hands of the current ayatollahs regime in Iran is something I, as an Iranian Jew, can never forget and will never stop speaking out against for as long as this brutal regime remains in power.  This is a pain that many in my Iranian Jewish community in America still carry because we had loved ones executed, we were imprisoned, we were tortured, we had our livelihoods and properties randomly confiscated by this regime in Iran all because of the “crime” of being born Jews in that country.

Other Jews may never fully understand the depth of our painful experiences since February of 1979, but as the first victims of this evil Iranian regime, we Iranian American Jews have a duty to educate the world about the very real dangers of this regime and stop this regime’s quest for another Jewish genocide.

Read article in full
Posted by bataween at Wednesday, February 13, 2019

What is the the saddest things about this sort of dependency on an endless stream of verbiage {especially of the junk academic genre} and "memories" and futile VERBAL "condemnation of the most threatening and thoroughly failed section of the human race ? Those who engage in it, no matter how matter how "noble" their "message", actually believe they are "DOING" something: Or offering some kind of real "support" to remedy what was done to them. But all they are achieving is to stigmatize themselves as the archtypical victims "who are the "permitted blood" {Zeev Jabotinsky's century old description of the Jewish victim mentality of that time.} Islam and the majority of Muslims are the authentic heirs of Amelek and the Nazis. Genocide is built right into their faith and cultures no matter where they live, what they look like, or what languages they speak or what Ethnic groups they are. Righteous retribution is long overdue against them. They are the authors of their own misfortunes. But they cannot change their behavioral patterns. Especially when they are not opposed by their weak feckless targets of opportunity. Namely US. They must be confronted physically and strategically with something other than words..No matter where they live: Without accounting for our actions, justifying ourselves verbally, Let alone apologizing for what we HAVE to do. That which demands nothing is worth nothing. THEY are the most vulnerable ones. As well as their lib-left dhimmis, regardless of their origins or empty corrupt motives.GOOGLE Norman L. Roth