On 4 February 2019, Jews across the world read the Torah portion of Terumah. At this time some Djerban Jews celebrate a mini-Purim to recall their deliverance from their Nazi oppressors.

What happened to the Jews of Djerba during the six months of Nazi occupation during World War II? Isolated on their island in the farthest corner of eastern Tunisia,  the Jews of that community appear to have been spared the round-ups resulting in males between the ages of 16 and 60 being sent to do forced labour. 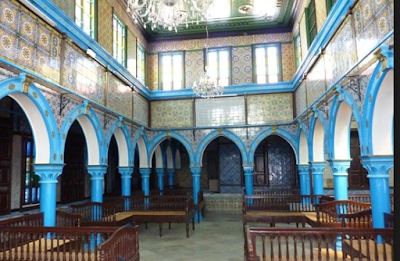 The al-Ghriba synagogue on Djerba, focus of the Lag Ba'Omer pilgrimage

But one incident does stick in the collective memory. At the time of the reading of Terumah, the Nazis sent out instructions that the Jews of Djerba should immediately give them 50 kg of gold.

The deeply religious Jews of Djerba had just read the verse: "God instructed Moses to tell all Israelites whose heart so moved them to bring gifts of gold."

On that Shabbat, the residents knew that something was seriously amiss when the chief rabbi of the island drove around in his car collecting the gold. He did not manage to fill the quota of 50 kilos. The treasure sank in the sea off the island of Corsica and a British expert claims to have found it in 2007.

But the Nazi occupation was on its last legs, and two months later, in May 1943, the Allies re-conquered Tunisia.