The son of a Jewish refugee from Iraq and descendant of 19th century Chief Rabbi Abdullah Somekh,  has been named antisemitism monitor at the US State Department. Elan Carr, who speaks Hebrew and Arabic, also served in Iraq after the fall of Saddam Hussein as an army major. He arranged for Hanucah to be celebrated in the dictator's palace. The Times of Israel reports:

Carr has a knack for getting attention with acts of dramatic symbolism: As an Army major in Iraq in 2003, he organized a Hanukkah celebration at the palace of deposed dictator Saddam Hussein, who had persecuted the country’s Jewish community. 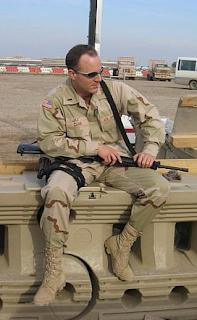 It was an especially sweet moment for Carr, he told The Times of Israel in 2013, because his grandfather was jailed in Iraq during the anti-Jewish acts following Israel’s establishment in 1948.

“Hanukkah, the symbol of freedom, of conquering a profane and cruel tyranny that defiled a land,” Carr told The Times of Israel. “We were profoundly moved by the experience.”

Carr’s mother is descended from Iraqi Jews, while his father is Ashkenazi. He attended a Jewish day school, spent a lot of time in Israel growing up and joined Alpha Epsilon Pi, the leading Jewish fraternity, at the University of California, Berkeley, which he says helped change his life. He was the organization’s president, or supreme master, from 2012 to 2014.

“There was a concern young Jews were becoming less civically engaged, and learning what civic engagement was, what activism was, by having a program to teach students these opportunities upon graduation, they would be better equipped to seek civic leadership,” he said.

More about Carr's family history at the Times of Israel (With thanks: JIMENA)

Posted by bataween at Wednesday, February 06, 2019