Some good news at last: Following a historic meeting with two dozen American Jewish leaders, President Sisi of Egypt has given the green light to the cleaning up of Bassatine Cemetery in Cairo: The American Jewish Committee (AJC) commends Egyptian President Abdel Fattah al-Sisi's decisions to clean and protect the historic Jewish Bassatine Cemetery in Cairo and to make available the country's Jewish Communal registers. 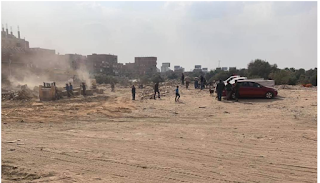 AJC, the global Jewish advocacy organization, has long called for these and other measures to preserve the heritage of the Egyptian Jewish community, which once numbered more than 80,000 and today is estimated to be fewer than 20. Egypt's commitment to preserve Jewish sites and records is vitally important," said Rabbi Andrew Baker, AJC Director of International Jewish Affairs, who has visited Cairo.

AJC also has raised these issues in meetings with Sisi in the past. Sisi's announcement this week followed his meeting with a delegation of Orthodox Jews visiting from New York. Bassatine Cemetery, which dates to the ninth century, contains thousands of Jewish graves. Neglected for years, most of the inscribed headstones have been looted and squatter's apartments cover much of the original site. Broken walls leave it unprotected, and garbage is strewn throughout the cemetery. One day after Sisi's announcement bulldozers and other equipment were dispatched to the cemetery to begin the clean-up process.

The Communal Registers contain important personal data, including births, deaths and marriages, of the Jewish Communities of Cairo and Alexandria. "For many Egyptian Jews these are the only formal records which might otherwise be inscribed in civil records. And there are cases where they are very important in proving a person's Jewish identity, for burial or for marriage," Baker said.

Access to this official documentation is important to the religious life of Egyptian Jews and their descendants around the world. AJC, together with the Nebi Daniel Association of Jews from Egypt, the Jewish Community of Cairo, and the Consistoire of France, has called for a copy of the registers to be deposited with the Chief Rabbinate of France. AJC expects that Sisi's decision will lead soon to implementation of the Egyptian Ministry of Culture's unfulfilled promise to AJC in May 2017 to allow the registers to be copied.


Vosizneias blog quotes a report on the meeting with President Sisi (with thanks :Boruch): 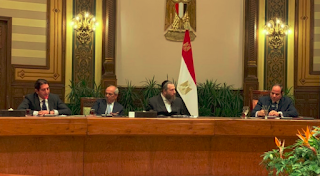 Drawing on the Jewish people’s ancient links to Egypt, Henry Manoucheri, a leader in Los Angeles’ Persian Jewish community, told Sisi that Egyptians and Jews are linked by a common historic bond that connects their souls. Manoucheri said that he found Sisi to be positive, emotional and clever, blessing him with a long life and many years in the Egyptian presidential palace.

Sisi politely refused Manoucheri’s offer to cover the cost of much needed repairs to Egypt’s dilapidated Jewish cemeteries.  Two hours later, the requested work was already underway at the cemeteries, reported New York City’s City Planning Commissioner Joseph Douek, a member of Brooklyn’s Egyptian Jewish community who was also part of the delegation. “Representatives of what is left of the local Jewish community told me that shortly after our meeting, they received a call from the municipality saying that the work had started and that the local Jewish community would be called in to inspect their efforts,” said Douek, the great nephew of Egypt’s last chief rabbi, Rabbi Haim Moussa Douek.

Douek also spoke with Sisi about the return of several Torahs and archived documents that are being held in Egypt but was told that those items would remain in the country. “He told me that they were all being well maintained and well preserved, something that I know for a fact to be true,” said Douek.

“He offered to make us the best possible copies of any documents but insisted that the originals were part of Egyptian heritage and history.  While it wasn’t the answer I wanted, he was honest and forthright and I respect his response.”

Lebanese born Rabbi Elie Abadie, rabbi of Manhattan East Synagogue, head of the Sephardic Academy of Manhattan and president of Justice for Jews from Arab Countries, conversed with Sisi in his native tongue, inviting him to Washington to see the Congressional Gold Medal and explaining its significance.

“I told him that we appreciate his strategic alliance with Israel and his friendship with the Jewish people,” said Rabbi Abadie.

“After discussing Egypt’s Jewish heritage sites, I gave him the special blessing that is said for heads of government. It was all in Arabic and he responded in kind saying ‘Āmīn, Āmīn’, the Arabic form of ‘Amein.’”

Ezra Friedlander said that the meeting surpassed all of his expectations and that he was grateful for the opportunity to be able to demonstrate American Jewry’s staunch support for Sisi and the pivotal role that he plays in the Middle East and in addressing terror worldwide.
Posted by bataween at Sunday, February 24, 2019