' I was never a Moroccan Jew, only a Jew in Morocco', Irin Carmon's grandfather tells her. He has put his past behind him, but it is a past, full of ghosts and magical thinking, that Irin is eager to reconstitute. Here is her lyrical account of her visit to Morocco in Tablet magazine. (With thanks: Shulamit) 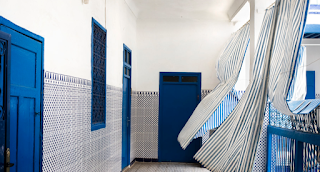 My grandfather does not remember himself as a dupe. He remembers three beatings on the road to Israel.

The first beating came in 1948, when he would have been about 15, he went to buy a newspaper and saw that the Jews had occupied Jaffa. A boy his age, he tells me, saw him smiling, and demanded, “Tu es satisfait? De quoi?” Yes, I am satisfied, he replied, “Qu’est-ce que tu veux?” What do you want? My grandfather began backing into an alley.

The second beating occurred two years later, at the border between Morocco and Algeria. He had spent two weeks salary on laissez-passer papers to cross the border at Oujda, which was letting its Jews leave for what was by then the State of Israel. He was around 17. At the border, they told him to empty his pockets and turn around. He remembers the kick that knocked him to the floor and the 24 hours in jail for having what turned out to be false papers. A member of the Jewish community bailed him out as the ones before him had been, and put him on a train to Casablanca. There, he was taken in by relatives and wrote letters for illiterate laborers to earn his fare home.

The third beating was in Casablanca a few months later. By this time, he had begun to drive a sardine truck between Agadir and Casablanca, a well-paying job. The clandestine network was still the only way for the Jews to leave. He heard about a travel agency that was a front for the Mossad, run by a Madame T. Each time he came to the travel agency to ask for her by name, he was told no such woman worked there. For three mornings he stood outside and watched as the clerk went for coffee and went up to the second floor. On the fourth day, when the clerk left, he went inside and went upstairs. There a woman sat. “Are you Madame T?” he asked. “I want to go to Palestine.” Israel was a forbidden word.

“You have the wrong address,” she replied.

But then she relented. At 17, she said, he was too old for the youth aliyah and too young for the army. He could, however, do agricultural training in France. Anything to leave Morocco, he replied. “Come back in a few days,” she said. “I’ll tell him to let you up.”

When the day came, my grandfather put on his best suit and in the crowded streets of Casablanca, bumped shoulder to shoulder with a boy around his age.

“Pardon,” my grandfather said, but the boy turned around and smacked him hard in the face. Blood seeped into his suit. When it became clear that the stony faced Meir was not going to fight back, the other boy became enraged and began to yell that the Jew had cursed Islam.

Unluckily for him, another Muslim who was sitting nearby had witnessed the entire encounter. Rising from his chair, the man slapped the boy in the face. “You’re a liar!”

My grandfather did not clean his suit or his face before he went to see Madame T. that day. “You see why I need to leave Morocco?” he grinned.

She did. Here were his instructions: At 4 p.m. he was to go to the Place de France and enter a horse-drawn carriage. The carriage took him to a bus that was already full of boys and girls. The bus took him to a house surrounded by trees and an orchard. At 2 in the morning they were awakened and taken to an abandoned port, where they sailed—at first, smuggled below deck—until Gibraltar. After 10 months in Toulouse and a month in Marseilles for agricultural training, he was on a ship to Israel.

The way he tells the story, he had to refuse the calls of sirens, women who sought his protection and who would tie him down. The family where he stayed in Casablanca had tried to trick him into marrying their daughter, such that his mother showed up all the way from Agadir to wish him well on his engagement. He was so furious he walked out on her then and there to begin sleeping on a park bench until they let him go to the promised land. Two weeks in Place de France. He still has a postcard of the bench. The woman on the boat from France who had asked for his protection; he told her she would get it on his terms only, which were cold and dutiful terms that demanded she keep her distance.

But he arrived in Israel reborn. “I became a child again only in Israel.”

A partial paean to coexistence in Morocco

Keep calm and carry on - in Mogador

Bataween, you may not agree with this account and if so, I can help you contact the author.

Hi Eliyahu
Thanks. although he says the Jews fared better under Islam than Christianity he produces a rather one-dimensional but disjointed account of persecution and pogrom. It is odd for him to segue into modern-day myths about the Palestinians. However, But I don't think it would be productive to challenge the author.