Was it his interest in Jews? Or his criticism of the Iranian Ayatollahs? We may never know why Alaa Mashzoub had 13 bullets pumped into his body on 2 February 2019. But targeted assassinations in Iraq are becoming an almost daily occurence, reports Seth Frantzman in The Jerusalem Post: (with thanks: Lily, Imre, Simone ) 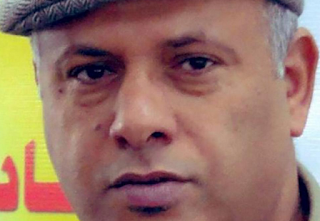 Alaa Mashzoub: wrote a novel about Jews in Iraq

According to The Baghdad Post, Mashzoub was born in 1968 and graduated from the University of Baghdad in 1993. He was a journalist and intellectual who wrote novels, including a book about Jewish history in Iraq, published in 2017. A journalist in the 1980s during the Iran-Iraq war, he suffered along with many Iraqis from the privations of the blockade in the 1990s following the Gulf War. After the toppling of Saddam Hussein in 2003, he became more prolific.
His novel on the Jews in Iraq, called Hamam al-Yahud (The Jewish Bath), takes place in 1918 and looks at a period of coexistence when the Jewish community was thriving. It received praise online in Arabic. According to an obituary published at Raseef22.com in Arabic, the book tells the story of a Jewish man who settled in Karbala, the Shi’ite holy city in Iraq. He opens a shop and builds a public bath, or hamam. The book highlights pluralism and coexistence.
The article asks why was he killed, and notes that the police have launched a special investigation and cautions against assigning blame. However, some pointed out that he was a critic of extremist elements in Iran and had critiqued the Islamic Revolution that swept Iran in 1979. It is the 40th anniversary of that revolution.
His murder is one of several high-profile killings in Iraq in recent years. Tara Fares, a beauty queen, was murdered in October, and other women involved in the fashion industry have been killed as well. A 2013 article from Al Jazeera noted that more than 500 Iraqi academics and intellectuals had been victims of targeted assassinations since 2003. In 2017, a wave of assassinations targeted doctors, becoming an “almost daily” occurrence according to locals.
Read article in full
Posted by bataween at Monday, February 04, 2019