A new political party campaigning for compensation for Jewish refugees intends to join the race to enter the Israeli Knesset on Election Day on  9 April. 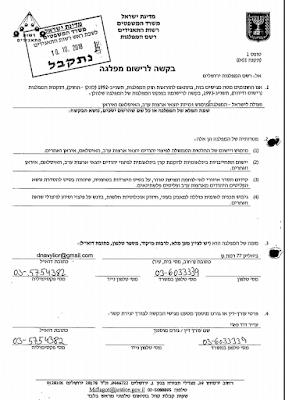 Document showing that the new party, Peula Le'Israel, has been successfully registered.

The objective of  the party, registered as Peula Le'Israel,  is to obtain compensation for all Jews from Arab countries, Iran and other Muslim states. 'Time is my greatest enemy,' declares party chairman David Navy. 'I must enter the Knesset in order to get billons from the US, Germany, the UK, France, Italy, Saudi Arabia and Japan.' Navy also envisages compensation for Palestinians in Israel and Jordan.

David Navy:'time is the enemy'

Born in Iraq in 1940, Navy, who is a qualified engineer and a lawyer, has been running two charities, Shemesh and Relief for the Poor. His greatest success, he claims, has been to obtain one billion NIS to support over 50,000 elderly Jews from Iraq, Morocco and Algeria. The Israeli government has been paying each needy citizen up to  40,000 NIS over four years. They are exempt from paying for medical supplies.

Navy was eleven when he and his family fled Iraq for Israel. His father was chief accountant in  the Eastern Bank in Baghdad. "The Iraqi government confiscated our money and property. We had no future in Iraq, " he says.

The family lived for two years in tent camps (ma'abarot ) in Bat Yam and Pardes Hanna.

David Navy first sprang to public attention in 2005 when Shemesh initiated a class action on behalf of Iraqi Jews to force Israel to obtain compensation from the Iraqi government. The move was unsuccessful.

Like other small parties Peula Le'Israel  thinks it stands a good chance of gaining at least one seat in the Knesset if the electoral threshold is lowered to below 3.25 percent.
Posted by bataween at Sunday, February 10, 2019

All our good wishes to Adv. David Navy on his courageous initiative, which will make him able to fight for our Cause, from within the Knesset.
Because we all know that without a fight from within, all the Parlamentarian bla-bla will continue, without even trying to get any of our compensations. Levana