Minister Gamliel gets a platform in Newsweek

It is rare for mention of Jews of Arab countries to penetrate the mainstream international media, let alone for a voice in the maligned Israeli government to make itself heard. This piece in Newsweek by the minister of social equality, Gila Gamliel, bucks both trends. Gamliel recently launched a new app for uploading the stories of Jews from Arab countries to an oral history website, Seeing the Voices. 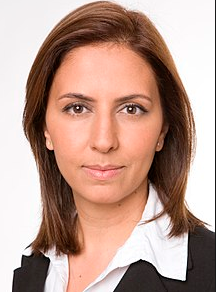 Gila Gamliel: story with us for good

Like most things, this history has its good and its bad periods; peaceful neighborly relations were followed by economic discrimination and then deadly violence as thousands of Jews were murdered in violent rioting caused by blood libels and false accusations.

My father Yosef escaped Yemen at the age of 10, and came to Israel as an orphan, where he was adopted by a Polish Jewish family. My mother Aliza came from Libya to Israel at the age of 6, the oldest of 12 brothers and sisters.
Aliza and Yosef were just two people among the 850,000 other Jews from Arab countries who were forced to leave their homes.

For seven decades, the story of the Jews from the Arab countries—both the good and the bad—was left largely untold both in Israel and around the world.
Now as a Minister in the Government of Israel, I am working to preserve the rich cultural history of our parents and grandparents from the Arab world.

We’ve just launched an app allowing Israeli citizens to document the testimony of family members and friends; we’ve promoted research on this history by academics and historians, we have marked an annual commemoration of the Jewish communities from the Arab countries; and we’ve made sure this history is in our classroom schoolbooks.

I can say with satisfaction that this important part of history is now with us for good.

It is a critical part of the story of the Jewish people who over centuries of steadfast determination managed to maintain their identity and religion, along with the dream of one day returning to the Holy Land.

In today’s ever-changing Middle East, the descendants of Jews of the Arab world, like myself, can serve as emissaries and ambassadors to a better future with the Arab world.


It is rightly said that the past cannot be changed.

But we can and should try to use our Jewish Arab heritage to serve as a bridge for a better tomorrow.

Read article in full
Posted by bataween at Tuesday, February 12, 2019

I am a refugee from Egypt.i will be 86in June. I would like to tell my story, but I live in the UK. How can I do that? I am afraid later would be too late! Thank you for informing me.

Hi Nicolette
Sephardi Voices UK will record (and video, if you want) your story. Contact sephardivoice@gmail.com
If that doesn't work email me at bataween@gmail.com