'If Jews return, Egypt will build them synagogues'

The Jerusalem Post has more about last week's historic meeting between American-Jewish leaders and Egyptian president Abdel-Fattah El Sisi. While his call to Jews to return to Egypt - there were once up to 100,000 Jews in the country - is a sign of progress, it must be stated that Jews will never return to Egypt while the general atmosphere remains deeply antisemitic. (With thanks: Lily) 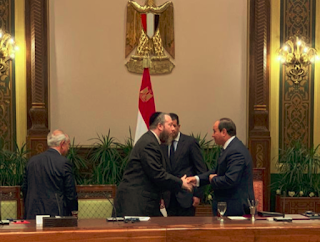 If Jews are interested in establishing a Jewish community in Egypt, the government will build synagogues and other communal institutions, Egyptian President Abdel Fattah el-Sisi told a US delegation during a two-hour meeting last week. The delegation was made up of the Anwar Sadat Congressional Gold Medal Commission that advocated the granting of the US Congressional Gold Medal posthumously to the slain Egyptian president who made peace with Israel. Its members traveled to Egypt to invite Sisi to the ceremony in the fall, when the medal will be given to Sadat’s wife, Jehan. The group was headed by the founder of the commission, Ezra Friedlander, an ultra-Orthodox consultant and lobbyist from New York who spearheaded efforts to have the award granted to Sadat. This required the passage of a bill that needed to be sponsored by two-thirds of Congress and was signed by US President Donald Trump in December.