Film is set in former epicenter of Syrian-Jewish life

'Roma', the film which won a BAFTA award and is a frontrunner to win an Oscar, is set in district of Mexico City once inhabited by Syrian Jews. Alan Grabinsky reports in Times of Israel: (With thanks: Paul)

During those early decades of development, the neighborhood became a stage where the global architectural trends of the early 20th-century — gothic, neogothic, and later, art nouveau and art deco — were given a tropical twist. Initially conceived for a European-influenced aristocracy, the neighborhood eventually became home to an emerging middle class, after the Mexican Revolution of 1910-1917. That’s when Syrian Jews started to move in.

Mexico City’s Syrian Jewry is unique in that it was divided in the 1930s into two separate communities, those who were initially from Aleppo (the “Maguen David” community) and those who came from Damascus (the “Monte Sinai” community). Both communities thrived in Roma, according to a specialist on Mexico’s Jewish neighborhoods, Monica Unikel.

From the late 1920s to the 1950s, Roma was the epicenter of Syrian-Jewish life. The second oldest synagogue of Mexico City, Rodfe Sédek — colloquially known as Cordoba, after the name of its street, and which now houses a library and archive documenting 100 years of Jewish life in Mexico — is a small replica of the Great Synagogue of Aleppo, and was established by the Maguen David community in 1931. 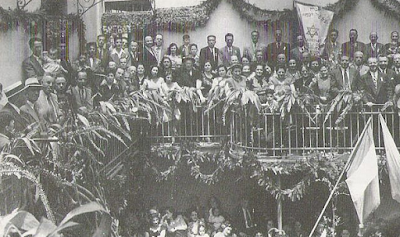 Inside the 'Cordoba' synagogue in 1945. It was modelled on the Great Synagogue of Aleppo

“By the 1930s, the tight-knight community of Syrians coming from Aleppo were already reproducing the habits of their homeland in Roma with their very own bakeries and shops,” Unikel told JTA. “As a matter of fact, Arabic could be heard in  Roma up until the late 1930s.”

Eventually, schools that catered to both Syrian communities were established in the area, and a series of temples where built to cater to their religious needs. (The Maguen David community was more rigidly Orthodox than the Monte Sinai.)
By the mid-1950s, at a time when the sister Condesa neighborhood was becoming the center for Ashkenazi Jewish life, a Syrian-Jewish exodus from the Roma neighborhood began. Scaling further up in society, Syrian Jews moved into the up-and-coming Polanco neighborhood and, by the early ’70s — the time when Cuaron’s movie is set — few Jews lived there anymore.

In 1985, the Roma neighborhood was devastated by a massive earthquake that cost the city billions of dollars, and for a couple of decades the area remained run-down. But over the past 10 to 15 years the district has been revived as Mexico City’s epicenter of cool: Today la Roma, as it is called in everyday slang, is one of Mexico’s trendiest neighborhoods, full of hipster cafes and boutique fashion stores on every other block. It caters to many international tourists.

But despite the geographical distance, some older Syrian Jews are committed to keeping Jewish Roma alive. Every Saturday, a group of 10 to 20 Jews drives up to an hour to attend Shabbat morning shacharit (or shajarit, in Spanish) prayers in Roma’s Monte Sinaí Synagogue — colloquially known as Queretaro. Although it wasn’t finished until 1953 (due to a shortage of supplies during World War II) the massive building, which seated up to 900 people during the High Holidays, was for many years the center for Damascus-Syrian Jewish life.

Read article in full
Posted by bataween at Sunday, February 17, 2019

True, Colonia Roma had a lot of Syrian Jews, but it was also a center for Mexican Jewry in general.

Many Jews still choose to live in Roma (although most of DF's Jews have decamped for the tonier precincts of Ploanco and Tecemachalco) and there are still functioning synagogues there, including Sefaradi/Syrian synagogues.