Why a Mizrahi refused to join the Women's March

Mizrahi women and their history of persecution in Arab countries are ignored and alienated by 'progressive and feminist' movements in the West. Writing in JNS News, Sarah Levin Krames, executive director of JIMENA, explains why she refused to take part in the 2019 US Women's March: 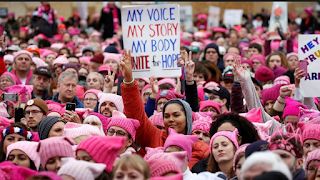 Despite the Women’s March welcome calls for diverse Jewish participation and their request that we, as Jews, sit in difficult spaces and face certain realities, they clearly weren’t willing to do so in a context where conversation might be uncomfortable and difficult for them, and that exclusion was noted. It’s very clear to me that these leaders are not willing to create or hold shared space for the ideological diversity that comes with truly welcoming intersectional communities into the tent.

Rather than being a place of freedom and liberation, the Women’s March has elicited feelings of unwelcomeness and alienation—feelings that are not uncommon for Jewish women from the Middle East and North Africa. Many of the Sephardic and Mizrahi women in the communities I work with feel completely maligned and ignored by progressive movements, including the Women’s March and Jewish feminist movements, simply for being who they are. Jewish women from Arab countries have a visceral understanding and concern of the inequities and oppression faced by women in the Middle East.

Our mothers and grandmothers lived to tell stories of being oppressed, third-class citizens who fled or were chased out of the region as refugees because of anti-Semitic, anti-Zionist governments. They moved on only to have their experiences and resulting outlooks ignored. Although we descend from the Middle East and North Africa, Mizrahi and Sephardic women don’t easily fit into American constructs of race. Controversies around “white Jews” versus women of color ignore important nuances of Jewish diversity by totally leaving out Mizrahi and Sephardic Jewish women. This erasure further alienates Sephardic and Mizrahi women. It feels as though our inclusion in the national Women’s March will only be welcomed if we align with a narrative where Middle Eastern women stand in opposition to the views of “privileged, white Jews” and Zionism. I totally reject this.

Sephardic and Mizrahi women’s intersectionality provides incredible opportunities for relationship-building in progressive spaces, but the vast majority of us continue to be on the margins, unable to feel we belong or are truly, unconditionally welcomed in movements like the Women’s March. My refusal to participate in the Women’s March was fueled by progressive feminists in the United States, including Jews, who routinely ignore the very real and ongoing plight of Middle Eastern women, including Jewish women.

This is personal for me as I reflect on my great-grandmother who fled anti-Semitism in Turkey, and as I sit and listen to my mother-in-law recall traumatic memories of escaping state-sanctioned anti-Semitic persecution in Iraq. I don’t want to join any women’s movement that doesn’t speak out loudly and boldly against the mass human-rights violations and brutal oppression of Muslim, LGBTQ and religious minority women in Arab countries as a result of war, extreme patriarchy and misogynistic religious interpretation. I didn’t want to march because I am an unapologetic Zionist who stands in complete solidarity with Israeli women who have endured never-ending cycles of anti-Semitic violence.

To be clear, my Zionism does not mitigate my desire to see Palestinian women live freely in peace and prosperity. I simply cannot march in a movement towards universal women’s freedom when its leaders promote a boycott of half the Jewish women in the world because of their nationality and refuse to acknowledge Israel’s right to exist. I didn’t want to participate because I feel that the Women’s March has an unspoken ideological litmus test of who gets in, and who needs to leave their identities and ideological orientations at the door. This has hurt some of the most vulnerable, alienated and intersectional women in the Jewish community, including Jewish immigrants from Arab countries and Jewish women whose lives have been directly impacted and upended by violent anti-Semitism and anti-Zionism.

I also feel strongly that the Women’s March leaders’ implicit bias against white, Jewish women has alienated and offended powerful potential allies, and I reject in any way that I’m betraying my Mizrahi and Sephardic communities to think so. If the Women’s March wants to be truly in integrity with intersectional frameworks, then it must come to terms with Jewish intersectionality in all its messiness. We are a very diverse and complex people after all. Like so many other Jewish women, my choice not to participate came from a place of deep pain and of even deeper mistrust of social-justice activists and movements that are holding up the banner of progress while waving flags and delivering speeches that so many Jews, including myself, perceive as blatantly anti-Semitic.

While I understand the critical need for dialogue, I have serious doubts that we can constructively progress with a movement whose national leaders routinely vilify Zionism, refuse to name and denounce anti-Semitic ideologies and leaders, and have hurt our community. I personally don’t see this as a reason to come to the table; I see it as a reason to leave it.

Like so many Jewish women, I’m tired of the tension between wanting to walk away, yet still desiring to fully show up and participate. As Women’s March leaders are asking Jewish women to step outside our comfort zone and recognize how we benefit from the same structural privileges that harm their communities (and members of our own community), I wish they could make an effort to see how important it is for us that they step outside their comfort zone to recognize, in the clearest terms, the diverse ideological power structures in America and beyond that continue to perpetuate anti-Semitism and violence against Jewish women.

The main reason I decided not to participate is because over the course of these last couple months, every time I thought about the Women’s March, my mind would recess to the darkest places in modern Jewish history. For me, the Holocaust is also personal, and as I grappled with my thoughts about the march, I would constantly feel the heavy pull of my other great-grandmother, who was murdered by Nazis in the Holocaust. I felt the spirit of her taken life warning me to never align with a movement whose leaders are so deeply embroiled in anti-Semitic scandals. Sadly, while the Women’s March should have filled me with the hope of progress, it brought up pain that is all too familiar to many second- and third-generation survivors.