Why Jeremy Corbyn needs to know about Mizrahi Jews

The author of a book on the treatment of Jews in Arab and Muslim lands has spoken about how the leader of Britain's opposition party, Jeremy Corbyn’s, understanding of Middle Eastern politics and history is a “complete inversion of the truth”, and has indicated that she would be happy to send him a copy of her work to read. Danny Silverman reports for the Jewish Chronicle: 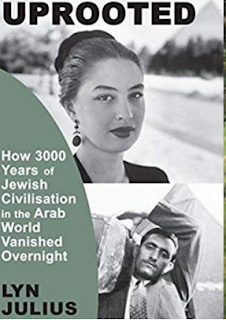 Speaking at the Limmud Festival, Lyn Julius, the author of Uprooted: How 3,000 Years of Jewish Civilisation in the Arab World Vanished Overnight, described how a knowledge of the experience of Mizrachi Jews – Jews primarily from the Middle East and North Africa – may help the Labour leader to “learn something new.

“It would certainly enhance the prospects for peace if he were to have a less lopsided and negative view of the Jews and Israel.”

Ms Julius, who is also the co-founder of Harif, the UK Association of Jews from the Middle East and North Africa, cited, for example, the widespread belief on the far-left that Israel “is a white, colonial settler state.”

In fact, she said, “half the Jews of Israel are so-called ‘people of colour’ – they have their roots in Arab and Muslim lands. That’s just over 50 per cent of the Jewish population of Israel.

“If Corbyn knew about Jews from the Middle East and North Africa, he would learn that they were in the region 1,000 years before Islam.”

Ms Julius also said: “The Jews from Arab countries could have told both Corbyn and Livingstone that the Ha’avara Agreement was not evidence of collaboration between Zionists and Nazis, but that it was a desperate measure to save Jews. In the same way, Israel made a deal with Iraq, with Yemen and with Morocco to rescue tens of thousands of Jews in distress and airlift them to Israel. This does not mean that Israel was in any way complicit with Arab persecution.”

She also described how “the Jews from Arab countries know that the distinction between ‘Jew’ and ‘Zionist’ is a spurious one.

“Zionism was declared a crime in Arab League countries. But how to define Zionism? Does having a Magen David on a prayer shawl count as Zionist? Does having a letter from Israel count as Zionist? Jews in Iraq were arrested for having wristwatches, because the authorities thought they were sending secret signals to the Zionists – and therefore the Jews would be arrested and charged with spying.
“Sooner or later, Jews are persecuted for being Jews, no matter how much they declare that they are anti the State of Israel.”

She said she would be “definitely” be happy to give the Labour leader a copy of her book.

“It has been suggested that I should do so, and maybe I should. The trouble is, the chances of him reading are actually quite slim. Anything which does not confirm his worldview I don’t think he would read – but I could try.”
Ms Julius also called for the establishment of a museum in Israel which would tell the story of Mizrachi Jews and how they were in many cases forced to flee from places where they had lived for centuries, if not millennia.
"There is a plan to build such a museum", she said.

"Discussions are going on at the moment as to exactly where it should be and what should be in it. I think it would be a brilliant idea; visitors should not only go to Yad Vashem, but be taken to this museum. But we’ll need to wait a few years before it actually materialises."

MEMRI ran a short film of a palestinian Arab writer who advises the Arabs not to say Jews but to say Zionists. Blaming Zionists and not Jews will be much better received abroad.
‏

Palestinian Author Mushir Al-Farra: MEMRI Monitors Everything; We Should Stay Away from the Word "Jew," Talk about "Zionists" Instead


here is the web address for the film clip of Mushir al-Farra
https://www.memri.org/tv/palestinian-author-mushir-farra-not-confuse-zionists-jews-memri-is-watching

A spurious distinction. Will they ever learn?