The Cairo newspaper that provoked and criticised

Jews produced more periodicals in Egypt than any other minority. Until its demise in 1941, L'Aurore was not afraid to criticise the local Jewish leadership, nor to display its sympathies with Zionism. In December 2018, back issues of the newspaper were uploaded to the Historical Jewish Press website, which is managed and maintained by the National Library and Tel Aviv University, with assistance from the Union des Juifs d’Égypte en Israel Association, AJE in the UK and ASPCJE in France. Blogpost on The Librarians site. (Note: Editor Jacques Maleh was not a banker but a lawyer, and Leon Castro, who spearheaded the boycott against Nazism, did not use l'Aurore as a mouthpiece - the newspaper invited Castro to write for it): 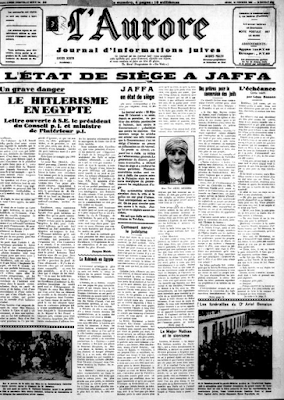 A February 1933 edition of L'Aurore


One of the most important Jewish newspapers in Egypt was L’Aurore (The Dawn). Its owner and first editor was Lucien Sciuto (Thessaloniki, 1886 – Alexandria, 1947), a writer and educator, who originally founded the paper in Constantinople, Turkey. Conflicts with leaders of the local Jewish community led to its closure, and, in 1919, Sciuto immigrated to Egypt. L’Aurore was published in Cairo from 1924 to 1941.

The weekly newspaper, characterized by its Zionist and Jewish affiliation, covered many areas of interest – Religious affairs, local Jewish community leaders, relations with world Jewry including the Jewish community of Mandatory Palestine and relations with the Egyptian regime. In addition, the paper published translated articles from newspapers in Mandatory Palestine and starting in 1938, it even included a page written in Italian.

L’Aurore was considered a critical and provocative newspaper. It was not afraid to criticize the heads of the local Rabbinate and Jewish community in Egypt. It was also the first Jewish Egyptian newspaper to send reporters into the field, rely on sources and carry out investigative journalism to expose the reader to deficiencies in the local Jewish leadership.