Israeli TV news has announced that Israel is to seek  $250 billion compensation for Jews dispossessed in seven  Arab countries and Iran (not including Algeria and Lebanon). An accountancy firm  has been evaluating lost property and assets over the last 18 months. The announcement, by the Ministry of Social Equality and reported in the Times of Israel, is timed to influence the long-awaited Trump peace deal. The money would be distributed by the Israeli state via a special fund. It is not clear if this is the International Fund, first mooted by President Clinton in 2000. (With thanks: Shimon, Sandra, Sheila and others who flagged this article) 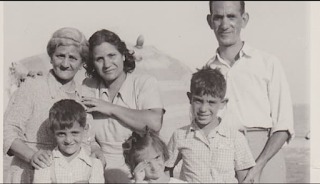 The Bonan family before their expulsion from Egypt

Israel is preparing to demand compensation totaling a reported $250 billion from seven Arab countries and Iran for property and assets left behind by Jews who were forced to flee those countries following the establishment of the State of Israel.

“The time has come to correct the historic injustice of the pogroms (against Jews) in seven Arab countries and Iran, and to restore, to hundreds of thousands of Jews who lost their property, what is rightfully theirs,” Israel’s Minister for Social Equality, Gila Gamliel, who is coordinating the Israeli government’s handling of the issue, said Saturday.

According to figures cited Saturday night by Israel’s Hadashot TV news, compensation demands are now being finalized with regards to the first two of the eight countries involved, with Israel set to seek $35 billion dollars in compensation for lost Jewish assets from Tunisia, and $15 billion dollars from Libya. In total, the TV report said Israel will seek over $250 billion from those two countries plus Morocco, Iraq, Syria, Egypt, Yemen and Iran.

Justice for Jews from Arab Countries (JJAC), an international umbrella group of Jewish community organizations, has estimated that some 856,000 Jews from 10 Arab countries — the other two were Algeria and Lebanon — fled or were expelled in 1948 and after, while violent Arab riots left many Jews dead or injured.

For the past 18 months, utilizing the services of an international accountancy firm, the Israeli government has quietly been researching the value of property and assets that these Jews were forced to leave behind, the TV report said. It is now moving toward finalizing claims as the Trump Administration prepares for the possible unveiling of its much-anticipated Israeli-Palestinian peace proposal.

A 2010 Israeli law provides that any peace deal must provide for compensation for assets of Jewish communities and individual Jews forced out of Arab countries and Iran. “One cannot talk about the Middle East without taking into consideration the rights of the Jews who were forced to leave their thriving communities amid violence,” said Gamliel, a member of Prime Minister Benjamin Netanyahu’s Likud party.

“All the crimes that were carried out against those Jewish communities must be recognized.”

The Palestinian Authority has sought over $100 billion in compensation from Israel for assets left behind by Arab residents of what is today Israel who fled or were forced to leave at the time of the establishment of the Jewish state, and presented documentation to that effect to the United States a decade ago, the TV report said.(...)

Monies obtained from the eight countries would not be allocated to individual families, the TV report said, but would rather be distributed by the state via a special fund. Gamliel is coordinating the process, together with Israel’s National Security Council, which works out of the Prime Minister’s Office.

This may be a noble cause but realistically, do they honestly believe the Arabs and Iranians are really going to pay up?