In an unprecedented series of visits, three delegations of local leaders from Iraq have reportedly made trips to Israel in recent months, and held meetings with Israeli officials. The Times of Israel has the story: (with thanks: Lily, Sandra)

Iraq is at war with Israel and is a firm supporter of the Arab League boycott of Israel. Its passports are not valid for travel to Israel. The groups made the trips, which were firmly designated as unofficial visits, under conditions of great secrecy, the TV report noted, in part in order to avoid antagonizing Iraq’s Iranian neighbors.

The local Iraqi leaders were not from Iraqi Kurdistan, the TV report stressed, but rather from “Iraq proper — that is, Baghdad.” The three delegations comprised both Sunni and Shi’ite members — “influential figures in Iraq.”

The trips were mainly of a “social-cultural nature,” the TV report said, and also featured meetings with organizations that deal with the Iraqi Jewish heritage. The goal, the report added, was “to build the infrastructure for future ties” between Iraq and Israel, with these delegates going back to Iraq as “kinds of future ambassadors” for Israel there.

Iraqi beauty queen in Israel: 'people looked like my people'

More about relations between Iraq and Israel 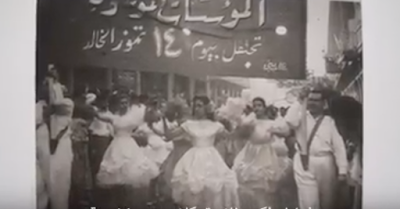 A memory of the Kassem parade. To see full video (Arabic) click here.


A group of Iraq-born Jews now living in Israel have made a film recording their memories of  parades to commemorate the 14 July 1958 revolution led by Abdul Karim Kassem and a group of army officers. The parades were held every year for four years until the Kassem regime was overthrown.

The Jews, teenagers or children as young as eight, were chosen to represent the Jewish community. They had to gather on their float at midnight in order to be ready for the start of the parade at 7 am.

They recall how General Kassem stood to salute the kids when the Jewish float approached. The float had a golden statue of the general.

One year, the leg broke and one of the participants had to sit on the statue for three hours to hide the break. Another recalls presenting Kassem with flowers and asking him to autograph his photo.

In spite of its bloody beginning  - in 1958 the young king and members of the government were murdered and their bodies dragged through the Baghdad streets - the Kassem era is remembered as a brief 'golden age' for the remaining few thousand Jews. Their rights were restored and they were treated as equal citizens. But that era ended with the assassination of Kassem in 1962.