How rigorously was Orphans' Decree in Yemen enforced?

The Yaqin Institute has Islamist links and an interest in revising history in order to whitewash the less savoury aspects of Islamic history - such as forced conversions. This article downplays the impact of the Orphans' Decree in Yemen reintroduced by Imam Yahya in the 1920s. Turning a blind eye to Jews escaping Yemen to avoid conversion, is portrayed as a virtue. (Hitler, too, allowed Jews to escape persecution in the 1930s. This does not make Hitler any less of an tyrant.) (With thanks: Lily) 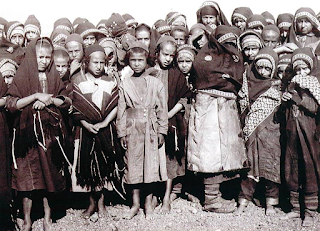 Another case of forced conversion in Islamic history is that of the Orphans’ Decree issued by Imam Yahya al-Mutawakkil (d. 1948) in the early 20th century. After the First World War, the crumbling Ottoman Empire recognized Yahya as its successor in Yemen. Yahya then laid claim to “Greater Yemen,” parts of which were ruled by the British or Yahya’s political rivals. As a leader of the Zaydī community, Yahya also re-introduced Zaydī law, part of which contained the “Orphans’ Decree” requiring his government to forcibly convert orphaned Jewish children to Islam. [41]However, a closer look at the case of the Orphans’ Decree reveals that though Imam Yahya himself introduced the decree, he turned a blind eye to the smuggling of Jewish orphans out of Yemen to avoid conversion, and on some occasions even facilitated this process.[42] The Jews who fled from Yemen exaggerated the number of children forced to convert in an attempt to earn sympathy for the cause of helping more Jewish children escape.[43] However, the guardians of many Jewish children helped them to escape to Imam Yahya’s jurisdiction rather than from it, and they found refuge with the very regime that was ostensibly bent on forcing them to convert to Islam.[44]
Imam Yahya, for his part, implemented the decree selectively, and in doing so he revealed his reason for introducing it in the first place: it had little to do with a desire to forcibly convert his Jewish subjects to Islam, and more to do with asserting his authority in an unstable political environment in post-WWI Yemen.[45] Though a reductionist narrative of the Orphans’ Decree may immediately present it as a case of Islam being “spread by the sword” among Yemen’s Jews, it is noteworthy that Jewish sources describe Imam Yahya in very favorable terms.[46] At the same time, “Yemeni Jewish writings discuss the forced conversion of Jewish orphans explicitly but are reluctant to mention voluntary conversions.”

Tudor Parfitt compares the Orphans' Decree to "draconian measures introducing the forced conscription of Jewish children into the Czarist's army" in Russia.[4] Concerning the reintroduction of the Orphans' Decree in Yemen in 1921, after the end of Ottoman rule, Parfitt says that "in the first ten years" it "was implemented with great rigour."[4]

Once again the decree was not implemented equally in every part of Yemen. In some places the authorities turned "a blind eye" to escaped and hidden children, but, in the places the Decree was implemented, troops were sent to search for escaped children, and the leaders of Jewish communities that were suspected of hiding the children were "imprisoned and tortured".[4][2]

In 1923 the Jewish community of Al Hudaydah suffered the abduction of 42 orphaned children, some of whom managed to escape.[4]
A witness account from Sana'a recalls an abduction of two fatherless siblings, a brother and a sister. The children were forcibly taken from their mother's arms and beaten to make them convert to Islam. The Jewish community offered to pay for the children's release to their family, but Islamic law prohibits accepting money to avert such a conversion. The witness compares the ceremony of the conversion of the siblings to a "funeral procession".[4]

After getting out of the orphanage, converted Jewish boys were often enlisted as soldiers. The girls made a valuable asset as brides because there were no relatives who needed to be paid a bride price in order to marry them.[4]

Jewish communities responded by acting quickly when children were orphaned, sometimes taking children and placing them with Jewish families living in dense Jewish settlements, especially Sana, large enough that a Jewish family might lack Muslim neighbors who would notice the addition of a child to a family.[2]

However, because "hidden" children might be discovered and forcibly converted, relatives or the Jewish community sometimes arranged to take them out of the Yemen; cases are recorded of Jews making the arduous journey to settle in the Land of Israel with orphaned relatives or unrelated children they had adopted in order to escape the threat that the children might be taken for conversion.[2] In the first-half of the twentieth-century, the Chief Rabbi of Yemen, Yihya Yitzhak Halevi, worked tirelessly to save Jewish orphans from falling into the hands of Muslims.[5] From about 1920, British imperial control of Aden provided a safe haven to which orphaned children could be taken; clandestine caravans carrying orphans and traveling by night are known to have gone from various parts of Yemen to take orphaned children to the sanctuary of the British Empire.[2]
An orphaned boy or boy or girl could also be very quickly married, since married people had the legal status of adults and could not be taken for forcible conversion.[2]