How one prisoner found inspiration in Evin prison

The Book: a Humble quest into the Hebrew Scriptures is the result, soon after the Ayatollahs had taken power,  of one man's attempt to stay sane - and alive - in  Iran's most notorious prison: Evin. Lyn Julius reviews the book, one of the rare memoirs written by imprisoned Iranian Jews :

For decades the post-1979 government of the Islamic Republic of Iran has been dispatching its enemies to Evin - those who have plotted to overthrow the regime, those who supported the Shah's regime and his western allies, suspected homosexuals, alleged spies. They rubbed shoulders with common criminals and drug smugglers. 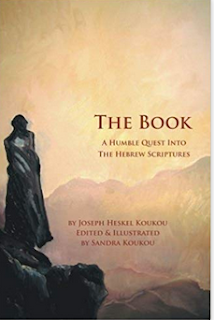 Into a cell four feet by ten feet, shared by ten prisoners with two blankets between them, was flung a Jewish manufacturer of brake linings by the name of Joseph Koukou. It was not clear what crime Koukou had committed, nor did it matter to the regime. In the revolution that had brutally overturned the social and economic order, a group of greedy employees had turned against Koukou and denounced him as a renegade or a Zionist spy. Every day inmates would be executed by firing squad on the flimsiest of grounds.

Koukou was one of the lucky ones. If he got out alive from Evin after serving just under five years, it was thanks to his 23-year old daughter Sandra. She managed to waylay the car of the judge in charge of Koukou's case. She managed to locate her father's file -  enemies were known to pay bureaucrats bribes to have files lost in the pile of cases awaiting a verdict. Seemingly encouraged by the spectre of her dead grandfather, Sandra's objective was not to get her father released, so much as to lessen the chances of his execution and get closure on his case. This was no foregone conclusion. The judge was so ruthless that he later sentenced his own son to death.

Sandra's story is recounted in Chapter Three of Koukou's memoirs, titled simply 'The Book'. Sandra illustrated and edited the memoir, which was published in 2015.

While in jail each prisoner was allowed to read only his holy book. Joseph Koukou immersed himself in the Hebrew Bible. The greater part of The Book is devoted to Koukou's musings on the biblical scriptures. While several of his companions took their own lives in the shower, Koukou found in the Tanakh the spiritual strength to sustain him - and others. 'He was a true friend in what was the most difficult time of my life,' wrote a fellow inmate. 'His spiritual and mental support to me and many others during that horrible time will never be forgotten.'

Accounts of the experiences of Jews victimised by the Ayatollahs during the Eighties have been few and far between - the best known is 'Septembers of Shiraz' by Dalia Sofer. The Book is thus a precious resource. Sandra Koukou has produced a moving tribute to her late father, his intelligence and courage.

The Book: a Humble quest into the Hebrew Scriptures by Joseph Heskel Koukou is available in hardback, paperback and Kindle from Amazon.