'An earthquake is shifting Iraqi opinion about the Jews'

Fascinating interview in Hamodia by Sara Lehmann with the protagonist of the film Shadow in Baghdad, Linda Menuhin, whose father was abducted in 1970s Iraq and never seen again. Linda will be showing the film at SOAS in London on 17 January 2019. 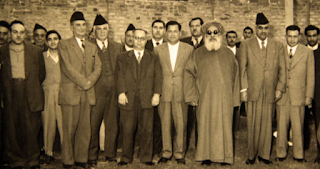 
How did the war affect your everyday life as a Jew?
They started to come after the Jews. They enacted many measures against the Jews. Jews were kicked out of social clubs, not admitted to university, not allowed to work anywhere. There was a kind of tightening of the rope around us. There was also incitement against Jews on the radio, in the newspapers. Even our Muslim friends and neighbors were scared to show any relationship with Jews. Just like in Germany.

What happened in Germany was the result of long-simmering anti-Semitism that gradually found expression in German laws against the Jews. But despite anti-Semitic allusions in the Koran, it seems as if this anti-Semitism had national and political origins.

Yes, you are absolutely right. Somehow those allusions didn’t float to the surface all these years. First of all, Jews pre-dated Islam in Iraq by 1300 years. So we were the indigenous people and we really didn’t feel anti-Semitism. Apart from the incident of the Farhud, anti-Semitic acts were exceptions to the rule. When the Baath Party came to power, they tried to intimidate the whole country. The best way is to start with the Jews, the most vulnerable component of the population. And then they went after the Christians and afterwards the Muslims themselves. I always say, first Saturday people, then Sunday people, and then Friday people.

In the documentary you talk about the public executions of Jews at Fahrir Square. Can you describe that episode and how it affected you?

In 1969, following a fake trial, Iraqi authorities publicly hanged 14 people accused of spying for Israel, nine of whom were Jews. I remember there was a live transmission on the radio of the fake trials for months. It was a terrible period for the Jews. During that time, we used to fast every Monday and Thursday and pray, as was customary in a time of trepidation for Jews. We prayed things would improve. In 1968, more and more people were arrested, interrogated, beaten in prisons, and never returned home. A 40-year-old relative of mine was taken to be questioned and came back in a body bag. Eventually they even stopped returning bodies and there was no burial. It was a cruel and violent regime that affected everybody.

Is that what drove you to leave Israel on your own in 1970?

Since childhood, my mother always told us stories about her family in Israel, and there was constant correspondence with our relatives there. So we grew up with the sense that we would eventually move there. But all these atrocities convinced me that we Jews will have the same fate in Iraq as those arrested and should move to Israel to join our brothers and sisters. I left with my brother in December 1970, and my mother and younger sister left six months after us. Our escape route took us through Iran, in the bitter cold. We left on a Friday and on Sunday my father was arrested, which proves that they were following every move of the Jews. He was arrested, released and then arrested again after my mother’s departure. We believe he was arrested because he bailed out 132 Jews who were caught trying to leave Iraq. My father signed an affidavit of support and was held responsible for their commitment to stay in Iraq and not run away again. He couldn’t do it for all of them because he had to pay a sum of money for each, so he had to find Muslim lawyers to do it. At that time, it wasn’t easy, because who would want to bail out a Jew? But he found some young Muslim lawyers trying to make a living who agreed to do it. Once these Jews started to leave again, my father didn’t have the capacity to pay all these amounts. I don’t know what happened to the other Muslim lawyers.

It’s not that they didn’t want Jews to leave. That was a pretext. They were looking for ways to extort them. I was always trying to find a common denominator among those Jews who were arrested; the majority were rich people that the government would benefit from by arresting. But in the end my father didn’t have the capacity to pay all the amounts he obligated himself to. Also, it was easier to pick him up because he was alone and didn’t have family left to inquire about him.

What prompted you to start searching for your father after so many years?

In 1991, during the Gulf War in Iraq, I was working as an Israeli television commentator and began having a very tough time. I started to have nightmares about Saddam Hussein and my position as an Iraqi working for Israelis. All of a sudden, I began to hate the Arabic language, which was my mother tongue. I eventually had to quit my job as a Middle East correspondent and editor with the IBA (Israeli Broadcast Authority) in Arabic and went to work for the Israeli police in intelligence. By 2003, the Iraq War put Iraq in the news again on a daily basis. But now things were different. Before then, there was an iron curtain which prevented me from even asking questions; now there was internet access to the Iraqi press. I approached the American embassy and then the Israeli Defense but nothing came out of it. Next, I went to London, because many Iraqis fled there from the Baath regime, primarily non-Jews. I met people who knew my father, but got no concrete information. I followed the news coming out from Iraq about the Baath regime’s mistreatment of Iraqis. I felt sympathy for all those who suffered. It wasn’t only me. I also saw sympathy expressed for the Jews. So I started to write and publish again in Arabic in a more personal way, and I started to get feedback.

Through such feedback you describe meeting an Iraqi journalist who tried to help you solve the mystery of your father’s disappearance. Were you surprised to get help from an Iraqi?

Yes. And I was very proud that I was able to penetrate the Arabic world. It used to be taboo. Who would ever publish something in Arabic by a Jew? Or an Israeli? But there were many people who wanted to help me who are not in the film. The Iraqi journalist spoke of his grandmother who remembered the “peace-loving Jewish neighbors who were forced to flee” and asks, “Why do we talk about the Christians and other minorities but not about the Jewish community? The community was here for over 2000 years.”

Do you think he is an anomaly?

No. These days, on the contrary. I wrote many pieces about the earthquake that is shifting public opinion about the Jews. First of all, the Iraqi population was a collective victim of its rulers and I think the violence had touched everyone. And there was fear, so no one would stand up for a Jew. They wouldn’t stand up for their brother. Now Hebrew and English books about Iraqi Jews are being translated into Arabic. I even have a picture of an Iraqi minister buying books about Jews. I think this is because it’s an issue of Iraqi identity, not just a minority identity. Now that everything is ruined, they are trying to rebuild that identity.

The Bush Doctrine that guided the Iraq War was intended to create democracy in Iraq but failed because of corruption and an ideological entrenchment of anti-democratic forces. Would you agree that it’s an uphill battle to change this mindset?

Yes, there was a culture of violence with political upheaval and indoctrination of entrenched violence. Bush came and wanted to change it, and it doesn’t change. But in relation to the Jews, it’s different. They look at the Jews as always having been part and parcel of the Iraqi fabric of society. Not only that, but the Iraqi Jews had contributed so much to the Iraqi society and economy. So dreaming of the Jews coming back is not just idealistic. They keep asking for their return. Looking for the Jews is not just a whim; it’s a practical goal. There’s a strong belief that since the Jews left, there’s no brachah in Iraq. There’s also a change of attitude towards Israel. The Iraqis see that Israel has done so much for the Palestinian cause and they think that the Palestinians have exempted themselves from the burden of responsibility. They feel that the Palestinians should focus on taking care of themselves.

Do they contrast the Palestinian refugee problem with the successful Israeli absorption of close to a million Jewish refugees from Arab countries?

Yes, but this population swap wasn’t highlighted enough. The story of the Jewish refugees was cut off from the narrative, both in Israel and abroad. And that’s what made me start advocating for this case. I have been active with the Justice for Jews from Arab Countries initiative.

I also helped to achieve the Day to Mark the Departure and Expulsion of Jews from Arab Countries, which was instituted in 2014. This day, celebrated on November 30, is commemorated in Israeli schools too, where it needs to be taught. There are two types of populations in Israel: Ashkenazic and Sephardic Jews. 50 percent of Jews don’t know about their own history, which is not fair.

More about Linda Menuhin
Posted by bataween at Friday, January 11, 2019