An American organisation which encourages aliyah (emigration) to Israel has received dozens of enquiries from families in France (most of whom are of North African origin) interested in moving to Israel  in the wake of the antisemitic tendencies displayed by the 'yellow vests' demonstrators. Here is an abridged version of a Times of Israel article: 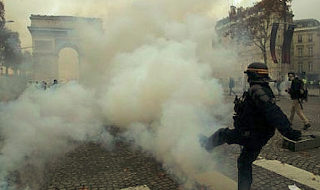 A policeman in anti-riot gear at a 'yellow vest' demonstration in November 2018 (Photo: AP, Michel Eulier)

Keren LaYedidout, founded by Rabbi Yechiel Eckstein, raises money from Jews and Christians in the USA to help emigrating Jews. Most of the Jewish community of France hails from North Africa. The organisation has assisted more than 1,200 Jews from France to make their aliyah by granting them financial aid.

The French deputy representing Jews abroad, Meyer Habib was also targeted in a long video whose theme is "why do Zionists resent the yellow vests"?

In the street and on social networks, several figures of the extreme right and antisemitic Holocaust-deniersalso supported the "Yellow Vests." Rabbi Eckstein was a major donor to the Jewish Agency for Israel, the government body responsible for immigration, until 2014, when he cut ties to create his own group, a sign of the beginning of a quarrel. He also took part in the creation of Nefesh B'Nefesh, another major aid group for aliyah, but cut short their relationship in the early 2000s. Keren Layedidout offers scholarships of $ 1,000 or pays six months' rent per adult.