What are Egypt's motives for restoring heritage?

Why is Egyptian president al-Sisi spending millions on restoring Jewish sites? The government has allocated 71 million dollars  for restoration, but it has since insisted that this sum is for restoring Coptic and Muslim sites, as well as Jewish. Does this development herald a better phase in Egypt's relations with Israel? asks Haisam Hassanein of the Washington Institute for Near East Policy. (With thanks: Boruch)

Some local political pundits have responded by saying the initiative should not come at the expense of impoverished Egyptians, arguing that foreign Jews should pay for it instead. Yet the announcement followed a string of favorable statements from prominent quarters regarding Egyptian Jewish heritage. 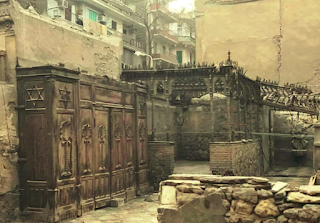 All that remains of this abandoned Cairo synagogue is the Ark

On December 6, editor-in-chief Khaled Salah of al-Youm al-Sabaa—a news outlet with close ties to Egypt’s security services—tweeted praise for Hanukkah, calling it a victory for monotheism against “paganism” and advising his audience to read about the Jewish festival’s central historical figure, Judas Maccabeus. This coincided with the first public Hanukkah celebration in decades at the Shaar Hashamayim Synagogue in Cairo, attended by members of Egypt’s tiny Jewish community alongside an American delegation. On November 4, during the World Youth Forum in Sharm al-Sheikh, Sisi stated that Egypt is willing to “build houses of worship” for Jews just as it does for other religions. He also declared that “it is the right of the citizen to worship as he wishes.” Three motivations best explain the government’s positive discourse toward Jews since Sisi came to power in 2013:

Improving Cairo’s standing in Washington. The government sees American Jewish citizens and organizations as a gateway to U.S. policymakers, whom they perceive as overtly sympathetic to Jewish causes.
2. Boosting tourism. Since the 2013 coup, the government has been actively trying to bring lost tourism revenue back to the country. Officials seem to believe that investing more money in restoring Jewish heritage will help market the country as a destination for global Jewish tourism.
3. Putting on a moderate face. According to Egyptian media rumors, the government plans to amend the constitution very soon in a manner that allows Sisi to stay in power past the normal limits. To ease the outcry likely to erupt from this and other upcoming decisions, the president’s advisors may be trying to burnish his image as a tolerant leader beforehand. In addition to enhancing relations with American Jewish organizations, this approach could also win him favor with the evangelical Christian community and its associated political organs. Yet taking a friendly approach toward Jews and Israel also raises several challenges for Sisi. Historically, Islam has regarded Jews as a protected and tolerated religious minority with some civil and religious rights, but without political status.

Hence, most traditional Muslims in Egypt have trouble comprehending or accepting the idea of a Jewish state, Jewish army, or Jewish political community. Moreover, a central tenet of the fundamentalist Islam practiced widely across Egypt is that Israel and the wider West are huge threats to Islamic territory and culture—a view that is periodically reinforced via negative images of Jews in certain Islamic traditions. Even those Egyptians who agree with Sisi’s attitude toward Jews would still have trouble accepting the idea of a neighboring Zionist state. The concept of Zionism has been vehemently rejected in national discourse for decades, to the point that the very word is almost impossible to mention in public due to its negative emotional connotations. Thus, while some Egyptians may be able to digest the idea of Israel as a territorial state with a government, ambassadors, and army, accepting Israel’s ideological foundations as a Jewish state is beyond everything they have been brought up to believe. As for Egypt’s Nasserists and leftists, they will seemingly never accept Israel. Nasserists tend to view the country as an outpost of Western imperialism, while many leftists (especially those with a strong pro-Russian orientation) see it as an intolerable tool of American hegemony in the Middle East.

POLICY RECOMMENDATIONS: Washington should continue encouraging Cairo to press Egyptian religious institutions on moderating their discourse. It should also insist that the government open the door for Egyptian liberals and moderate clerics who espouse peaceful notions and tolerance toward religious minorities. And in cases where public figures or the Nasserist/leftist media open popular debates on controversial subjects, Cairo should stay neutral and refrain from punishing those who speak out.

Posted by bataween at Wednesday, December 19, 2018