It was perhaps inevitable that the appointment of Rene Trabelsi as Tunisian minister of Tourism should have provoked street protests. The so-called 'moderate' Ennahda-led government is Islamist, but Jewish tourism to the island of Djerba is a major source of national income. The Times of Israel  reports (with thanks: Lily):

TUNIS, Tunisia — Dozens of pro-Palestinian demonstrators staged a protest in Tunisia’s capital against Israel and its policies toward the Palestinians Saturday.

The protest was held outside the Tourism Ministry. The country’s newly named tourism minister, Rene Trabelsi, is Jewish, only the third Jewish person to ever be named a minister in the country. Protesters expressed anger about Israeli settlements and called for a Palestinian state, with posters reading “Palestine is Arab, no choice but rifles,” and “Tunisia is free, Zionists out.”

The crowd included left-wing groups pushing a law that would make it a crime to normalize relations with Israel. 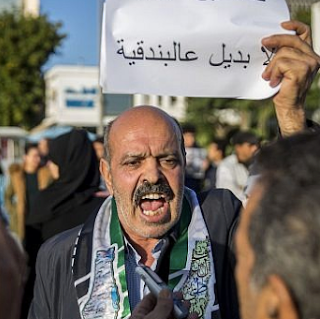 Tunisia’s government has downplayed the proposed law, and moderate Islamist party Ennahdha warned such a bill could hurt Tunisia’s relations with Western nations and international organizations. Tunisia, like most Arab countries, doesn’t have diplomatic relations with Israel.

Trabelsi, a tour operator who also organizes a yearly pilgrimage to the country’s famous Ghriba synagogue, became the first Jewish minister in the country in decades when he was named to the post last month.

Trabelsi grew up on the island of Djerba, the heartland of Tunisia’s Jewish community and the site of a pilgrimage which attracts thousands of people each year. Tunisia is seen as a model of tolerance in the region but has faced growing Islamic extremism.

Read article in full
Posted by bataween at Wednesday, December 12, 2018