The West denies ethnic cleasing from the Muslim world

Jews who fled Arab and Muslim countries are the refugee fall-out of a clash of civilisations.  They are invisible to a world which never passed a resolution on them, never published a mainstream newspaper column on them and has never broadcast a documentary on a national network about them. Giulio Meotti writes in Israel National News:

Every year, on 30 November, Israel and the Jewish world remember the 850,000 Jews expelled from Arab-Islamic countries. Many of them live among us in Europe, in Rome as in Paris, in Milan as in Brussels.

Together with the Christians who have fled in the last five years under Islamic persecution, these Jews are the migrants of the clash of civilizations which the Western conscience, the UN, the EU, did not even want to hear about.

I have never seen a docufilm on them on the networks that matter. I have never heard of an international resolution on them. 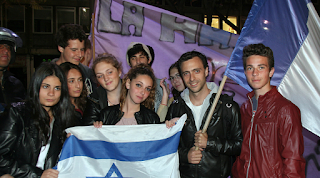 Jews in France, the sons and grandsons of refugees from the Arab world, are now being targeted by Islamists.
I have never read an article about them in the big newspapers. I have never seen a docufilm on them on the networks that matter. I have never heard of an international resolution on them.

Italian Jewish communities, for example, would have been dead after the Holocaust if it was not for the Jewish emigration from Libya or Iran.
Islam decolonized itself with an anti-Semitic ethnic cleansing whose very existence has been denied by the West. These Jews had been confiscated of everything: wealth totalling hundreds of billions of dollars. they were prevented from practising religion, they were kicked out of their homes, they were massacred in the streets, they were robbed also of their own history.
And they became invisible.

But their sufferings didn't come to an end with their flight. In France it continues today. Most French Jews, in fact, are the sons and the grandsons of those who fled the Arab world: Algeria, Morocco, Tunisia, Egypt. And these Jews are targeted again by the Islamists.

Read article in full
Posted by bataween at Saturday, December 08, 2018