There will be no just solution to the Arab-Israeli conflict without addressing the Jewish refugee issue, said the Israeli Consul-General to Montreal, David Levy. CJN News reports on Montreal’s Commemoration of the Exodus of Jewish refugees from Arab  countries and Iran.

Vivianne Schinasi-Silver calls herself “the last of the Mohicans,” the final generation to remember “the golden age” of the Jewish community of Egypt. The retired college teacher and her family were among the tens of thousands of Jews who were forced to leave the country in the aftermath of the 1956 Suez Crisis. They arrived in Montreal the following year.

Schinasi-Silver recounted her story at an observance of the annual Day to Mark the Departure and Expulsion of Jews From the Arab Countries and Iran, an event organized by the Israeli Consulate. The family of five – Schinasi-Silver, who was 15 at the time, was the eldest of three children – left behind a comfortable life in Cairo and nearly all their considerable assets, never to fully recover materially. Her parents and younger brothers also never completely adjusted, as she recounted in her candid 2007 memoir, 42 Keys to the Second Exodus. Five years ago, the Knesset designated Nov. 30 as a day to remember this neglected chapter in Jewish history.

The date was chosen because it is the day after the United Nations adopted a plan to partition Palestine in 1947. Nov. 29 is also the UN-designated International Day of Solidarity With the Palestinian People.

“Today, after decades of ethnic cleansing, there are perhaps no more than 2,000 to 5,000 Jews in all of the Arab countries combined, the majority of whom live in just one country, Morocco,” said Israeli Consul General David Levy, whose father was from Morocco. “Everyone speaks of the Palestinian refugees, yet nearly no one ever addresses the forgotten 800,000-plus Jewish refugees from Arab lands.”

Israel continues to try to find peace with all its neighbours, including the Palestinians, Levy said, but “we know that no solution to our impasse will be considered just, unless it addresses the long-forgotten issue of Jewish refugees from Arab lands.” 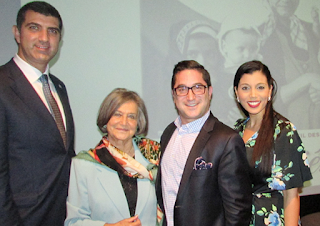 He said the day should also be a celebration of the rich Jewish history in the Middle East and North Africa, in cities as diverse as Tripoli, Aden, Damascus and Baghdad. “Established for centuries, these communities contributed enormously to the economic and cultural development and flourishing of these lands,” he said. But, as of 1947, it became “state policy to persecute, pillage and murder Jews. “This is why it is incumbent upon us all to remember, not only the plight of these refugees, but their presence and legacy in their native lands, which have since become devoid of any living Jewish presence.”

Read article in full
Posted by bataween at Wednesday, December 05, 2018