Feel-good story in the Wall Street Journal by Eliora Katz about how Miss Iraq, Sarah Idan, has been helping good Jewish causes in Israel and abroad. What the article does not say is that Iraqi hostility to her pro-Israel activities caused Sarah and her family to flee the country in 2017 for the USA. (With thanks: Lily)

The first Miss Iraq, Renée Dangoor, was a Baghdadi Jew. She was crowned in 1947. Last year Sarah Idan became the first Iraqi in 45 years to compete in the Miss Universe pageant, held in Las Vegas. There Ms. Idan took a selfie with Miss Israel, Adar Gandelsman, and posted it on Instagram.

“Saddam’s regime taught us that Israel and the U.S. are our enemies, and so we need to be at war with them,” Ms. Idan tells me at an Iraqi restaurant near Regent Park. Ms. Gandelsman sits to her left. The two have reunited to host a fundraiser supporting United Hatzalah of Israel. 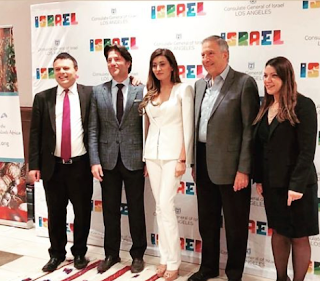 
The Jerusalem-based organization is the Uber of emergency medicine. It trains, equips and deploys 5,000 volunteers to medical emergencies through a smartphone app. When Israel’s 911 receives a call, a GPS-enabled app dispatches the closest and best-suited volunteer before an ambulance arrives, reducing average response time to 90 seconds.

Volunteers wear orange vests and carry medical bags. They sometimes board motorized “ambucycles,” which can traverse heavy traffic more swiftly than a conventional ambulance.
The volunteers are Jewish, Muslim, Christian and Druze: “I have people who pray five times a day and people who might be afraid of them,” says founder Eli Beer, 45. The people whose calls they answer are similarly diverse: a fish vendor in Jerusalem’s Mahane Yehuda Market, a man praying in a mosque in the Arab town of Kfar Qara, a rabbi teaching Torah.

“I’m also working to rebuild the relationship between Jews and Muslims,” Ms. Idan says. “So when I learned how so many Muslims who volunteer with Jews in Israel have started to see the Jews in a completely different light, I had to help.”

Read article in full
Posted by bataween at Thursday, December 20, 2018

Nice article as well as whole site.Thanks for sharing.


This was really helpful and gave me far more ideas.