Israel’s ministry of Social Equality  last week launched a website carrying some 500 testimonies of Jews who lived in Arab lands. 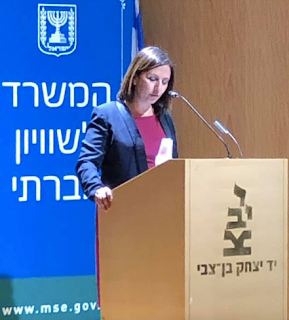 Gila Gamliel at the launch of the Seeing the Voices website

Minister Gila Gamliel launched the website, titled ‘Ro’im et ha’ kolot’ ( Seeing the Voices)
Ces) at the Yad Ben Zvi Institute before a packed audience. Some 10 million shekels were earmarked for the  recording of the testimonies of refugees from Arab and  Muslim lands and their absorption into Israeli society. The project also involved the Museum of the Daspora, the Steven Spiegel Fund and JIMENA. There are plans to extend the project to immigrants from the ex- Soviet  southern republics.

An App has also been developed so that grandchildren would be able to upload an interview with their grandparents.

The initiative is part of the government campaign to raise awareness of the exodus of Jewish refugees from Arab lands before that generation is lost.
Posted by bataween at Sunday, December 16, 2018