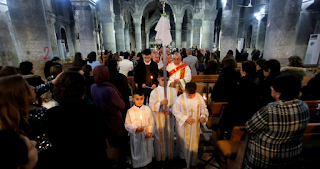 Christians filled churches in the city of Qaraqosh, southeast of Mosul, on Christmas eve to celebrate the holiday for the second year after their community was liberated from ISIS. At the Grand Immaculate Church, the hall was packed with worshipers and priests conducted prayers. It was one of many Christian communities in Iraq and throughout the Middle East celebrating the holiday with hope that the wave of extremist anti-Christian violence had subsided.

Iraq’s Christian community has faced difficulties in recent years, with waves of Islamist extremist terror and kidnappings, especially after 2003. Many emigrated. When ISIS attacked in 2014, the Christian towns of Nineveh were destroyed and their residents forced to flee to the Kurdish autonomous region, where many then decided to search for a life elsewhere.

However, a glimmer of hope appeared in October 2016 when ISIS was driven out of Nineveh plains and Christian cities like Qaraqosh, once home to some 50,000 people, and smaller towns nearby, were retaken. Last year, some Christians returned to Qaraqosh to conduct holiday services. Qaraqosh is an important symbol because it was the largest Christian majority urban area in Iraq. In other cities, such as Baghdad, Christians are a small minority, but Qaraqosh is a bellwether for the possibility that Christian communities in Iraq can rebuild and thrive.